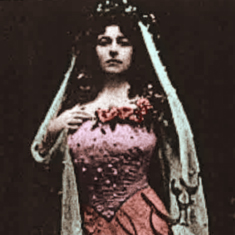 “New Zealand’s most famous daughter” began her career in Europe, singing at Covent Garden, La Scala and the Opera-Comique in Paris, and became a star member of the New York Metropolitan Opera, one of the world’s most enduring and distinguished opera companies. She was described as “one of the great voices of the Twentieth Century”.

Born in Christchurch in 1879, she gained early success as a light operetta singer in Melbourne. At 22 she set out for Europe and established herself in the tough, competitive world of European opera. Her performances captured the attention of Arturo Toscanini and Giulio Gatti-Casazza of La Scala, two of the most powerful figures in world opera, and she sang at La Scala for three seasons from 1906-1908. Then she was taken on as a member of the New York Metropolitan Opera, probably the leading opera company in the world. She became one of the Opera’s enduring stars until her retirement in 1929, triumphing over early back-biting by critics and her tempestuous marriage to Gatti-Casazza. Always versatile, she brought opera to small American towns and became one of the first opera stars to appreciate the developing medium of radio. She also toured New Zealand and lauded its virtues, recording Maori music and being associated with New Zealand in the American imagination.

The woman who later became Frances Alda was born Fanny Jane Davis. Her early life was unstable. Her father David wanted her mother, Leonore, to settle down in Christchurch. But Leonore, a promising singer from a musical family, had other ideas and in 1880, divorced her husband to resume her singing career. After false starts in Australasia, she took Fanny and her younger brother to San Francisco in 1883. Leonore remarried, but died of peritonitis a few months later, in December 1884.

The two children found a settled home in Melbourne with Leonore’s parents, Martin and Fanny Simonsen (after whom young Fanny was named). Martin, known for his fiery temperament, was a violinist and conductor and a steadfast promoter of professional opera in the Antipodes. His wife was one of the leading sopranos on the Australasian stage and several other relatives were also well-known singers. 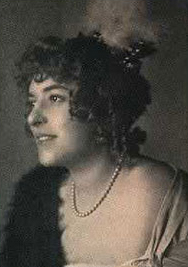 The early singing career of the young Fanny Jane began in Melbourne, in light operettas, Gilbert and Sullivan operas and pantomime. Yet there were limited possibilities for serious opera singers in Melbourne’s rough-and-ready provincial society. Letters from her aunt Frances Saville, principal soprano with the Vienna Hofoper, encouraged her to step onto a wider stage. Changing her name from Fanny Jane to “Frances Jeanne”, the young singer left for Europe in 1902.

In Europe, Frances had singing lessons with her aunt’s teacher, the well-known Mathilde Marchesi. Although Marchesi probably did relatively little to change Frances’ singing technique, she had significant influence in other ways. She imparted the polish and sophistication needed to succeed in an opera career: the finesse, language ability, stage movements; and off-stage, the etiquette needed for Europe’s more formal society. She also provided important contacts and an elegant, Italianate stage name for her pupil: Frances Alda.

Alda debuted as Manon in Massenet’s “Manon” at the Paris Opera-Comique in 1904. Over the next few years, she appeared at La Monnaie in Brussels and in 1906 stood in at Govent Garden for the other great Australasian soprano of the day, Nellie Melba.

Frances Alda, 1910 as Desdemona, Otello Library of Congress: “Ladies of the Opera”

Melba was in many ways the opposite of Alda, with a financially prosperous but musically impoverished background. In contrast Alda’s upbringing was rich in musical education but financially insecure. They had one quality in common, however – the determination necessary for obscure young singers from the edge of the world to make it in the ruthless and exploitative international scene. But Melba did not take kindly to rivals. Alda saw six further performances at Covent Garden cancelled without reason and realised that she had been the victim of professional jealousy.

Her debut at Covent Garden, however, was enough to bring Alda to the attention of two of the most powerful figures in European opera at that time: Arturo Toscanini, the conductor of La Scala, and Giulio Gatti-Casazza, its general manager. She sang at La Scala from 1906 until 1908, then when Toscanini and Gatti-Casazza took over the direction of the New York Metropolitan Opera she went with them to join the company, one of the most distinguished in the world.

In America, Alda also began a relationship that would affect the rest of her professional and personal life. She married Gatti-Casazza in 1910: as she commented, with typical forthrightness in her 1937 autobiography “Men, Women and Tenors” – “The two most grievous errors I made were when I married him and when I divorced him.” Her autobiography is acclaimed as one of best in classical music bibliography. 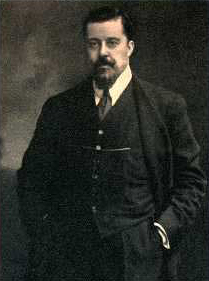 Alda’s relationship with Gatti-Casazza was fraught with difficulties from the beginning. He wanted her to give up her name like a demure Italian wife and sing as Madame Gatti-Casazza, but she felt she had earned her stage name and identity, so refused. Nor did her relationship help her professionally – she never took advantage of his role at the Metropolitan to secure better parts.

In fact, being his wife soon made Alda vulnerable to Gatti-Casazza’s enemies. In the guise of musical criticis they attacked Alda’s Metropolitan debut, attacking the Italian impresario. Her first notices – “The young singer who made her debut last evening comes from the land of the sheep and she bleated like one of them” – almost made Alda flee back to Europe where she had been appreciated, but encouragement from one of the leading sopranos of the day, Lilian Nordica, made her stand her ground.

Despite these personal and professional difficulties Alda prospered at the Metropolitan, winning over critics and audiences with performances such as Mimi in “La Boheme” (singing the role 63 times at the Metropolitan alone), as Desdemona in “Otello”, Marguerite in “Faust” and Margherita in “Mefistofele”.

In her relationship with Gatti-Casazza, they were soon leading amicable but separate lives, finally separating in 1928. 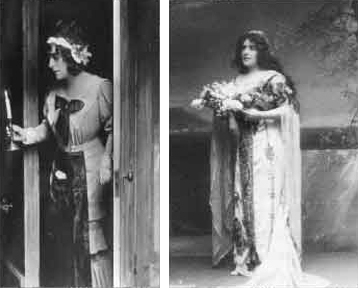 (Left) Frances Alda as Mimi in La Boheme and (right and below) as Desdemona in Otello. Above from: Metropolitan Opera Archives.      Below from: Roger Gross Ltd. 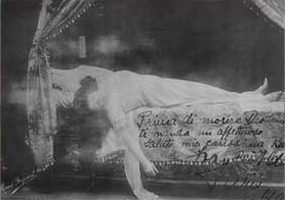 Beyond the Met – Broadening Her Talents

Alda’s interests extended beyond the circles of New York opera. She went on recital tours in America and overseas and toured with the Metropolitan Opera Quartet to small towns across America where full-scale operas were unknown. A prolific recording artist, she recorded both operatic material and more popular ballads and was one of the earliest singers to see the possibility of radio to bring operatic music to large audiences.

She was a keen supporter of the American navy during the First World War, and was so effective in her fund-raising efforts that she received a personal letter of thanks from Franklin D Roosevelt.

Frances Alda was also a proud and patriotic New Zealander. Though she spent little time in the land of her birth, her New Zealand tour of 1927 reawakened her feelings for her country. She heard traditional Maori music in Rotorua and recorded several Maori songs. She came to disdain Australia, although Australia claimed her as one of their own.

As Adrienne Simpson recounts, in a profile of Alda in “Women’s Studies Journal”, Alda expressed her feelings about the two countries in her inimitable style after her 1927 New Zealand tour:

“When the SS Aorangi docked in Vancouver, bringing her back from the antipodes, North American reporters were treated to a display of the famous Alda temperament as she launched into a tirade about the inadequacies of Australia and the virtues of New Zealand. Her comments, she claimed, were absolutely impartial, despite the fact ‘that New Zealand is my birthplace’.”

For the rest of her life she would be associated with New Zealand in the American press.

More Than A Diva

Alda was a forthright woman, her temper, as she noted, as fiery as her red hair. She knew well that a successful opera career demanded skilled self-management, as much as projecting the image of the fragile, doomed heroines she portrayed so successfully on the stage. She was a shrewd businesswoman used to dealing with unscrupulous concert promoters. In the polished and artificial world of New York opera, Alda was seen as plain-spoken and unconventional, a stickler for the terms of the contracts she signed with accompanists and other musicians, and quick to take slight. She was certainly never afraid to venture her opinion. 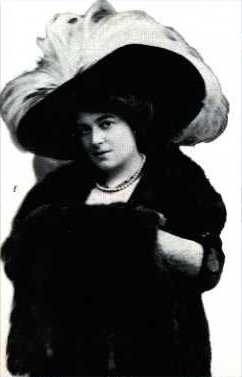 In Birmingham, Alabama, in early October 1919, Alda was on tour with well-known American Soprano Charles Hackett. Not known for her diplomacy, Frances expressed her disappointment over the small audience, and despite the fact that she had just been paid, berated the committee for failing to completely fill the house. The president of the concert association tactfully replied that Birmingham was the loser artistically and the association financially. “Well, after all”, declaimed Alda, “nobody knows Hackett anyway” “Yes” replied the president, “but they do know you!” and disappeared through the door.

Yet she was also a friend to many fellow artists, a supporter of younger artists starting on their careers, in contrast to the jealous Melba. She had strong opinions on the fair and professional treatment of young performers, as she showed through her membership of the Musical Union of Women Artists.

After her retirement from the Metropolitan in 1928, Alda continued to do radio recordings and vaudeville performances. She indulged in her love of travel and revelled in the role of the grand ex-diva. She re-married in 1941, to an American, Ray Vir Den, ten years her junior. This union was much happier than her first marriage, as Vir Den shared her unconventionality and sense of humour.

Frances Alda died in Venice on holiday in 1952 at the age of 83. Her death was marked by tributes in newspapers throughout America.

In 1997, some of her many recordings were re-issued by the National Library of New Zealand and by Atoll Records as “Alda in Opera and Song: Historic Recordings 1910 – 1928”. 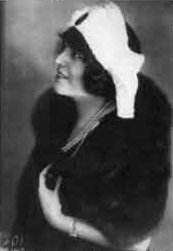 Our special thanks to Earl Okin for his contributions of photos, record labels and interview material.
http://www.earlokin.com/78.html

If you would like to read more about the life and work of Frances Alda, you could look at:

A CD of historic Alda recordings, “Alda in Opera and Song 1910-28” can be found at link below.  You can also listen to excerpts of Alda’s music.
http://www.allmusic.com/album/frances-alda-acoustic-electric-recordings-1910-1928-mw0001845690/credits

Simpson, Adrienne. (1997) “Treasures in Sound: He Puiaki Puoru”, Archifacts: Journal of the Archives and Records Association of New Zealand. October.