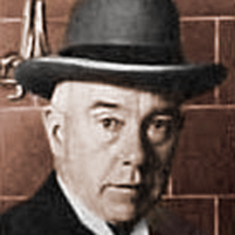 RJ Dickie invented, patented and marketed the world’s first stamp vending machine. His machines were in use for 50 years, 18,000 were used in Britain, with countless thousands around the world. The machine that won star honours at the 1909 Pacific Expo in Seattle came from a New Zealander with a single idea. Robert James Dickie was born in London on December 30, 1876. Twelve years later, he immigrated with his family to Wellington, New Zealand. He joined the staff of the Chief Post Office at Customs Street in 1891, and went to work in the foreign mail department.

Obsession with the Machine

It was the policy of the Post Office at the time to shift staff around the various departments to give them a wider knowledge of the organisation. While Dickie was working at the front desk selling stamps, it occurred to him that tearing stamps from a large sheet by hand was a waste of time, especially since most of the stamps sold were for the same value. A machine, he thought, could do this job just as well as a person. The idea was further entrenched when Dickie saw his first moving picture images. A newspaper feature, published at Dickie’s retirement from the Post Office in 1931, colourfully told of Dickie’s inspiration:

“… a film in slow motion, away back in the days when movies dazzled a man and left him bewildered, showed a Chinese in changing motions. If photographs could be controlled in that way, thought Dickie, why not stamps?”

The idea ticked over in his mind, but there were no quick, or easily definable, solutions. It took 13 years before he started making plans for a prototype. He had become fixated with the idea of the machine. In an unpublished 1948 autobiography he wrote:

“For some months, the idea of a machine to sell postage stamps (by means of a coin in the slot) became an obsession with me. I kept banishing the idea from coming into being, but at last the urge would not let me sleep, and for peace of mind started working on the making of the model.”

Dickie sought the assistance of Wellington photographer and draughtsman JH Brown who made accurate drawings from Dickie’s ideas. Later they enlisted engineer W Andrews to build the first model. Dickie, Brown and Andrews were the first patentees of the vending machine. 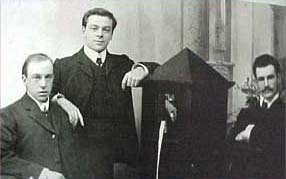 The new machine caused a stir when it was first seen. The February 28 edition of The Advocate newspaper gave a brief description of Dickie’s invention:

“The mechanism is simplicity itself, a fluted sprocket wheel with weights attached being set in motion by the descending coin, so as to make a single stamp project from a second slot. The action of the front slot is such that immediately it is opened it closes the second slot. The whole mechanism is only 9 inches by 4 inches in extent and the instrument may be charged to carry from one to one hundred pounds worth of coins.”

Initially, the biggest hurdle Dickie, Brown and Andrews had to face was how to get stamps in a long roll of singles rather than in sheets. Dickie lobbied the Government printers to print stamps in a roll but they refused on the basis of cost. He solved the problem by buying sheets of stamps himself, cutting them into strips and building a spool mechanism that, in the inventor’s own words was, ‘pretty crude’, but it worked.

In June 1905 the machine was ready, Dickie triumphantly demonstrated his invention to the Post Office authorities. A feature in the Dominion from 1960 quoted their response to his invention:

“The idea’s all right”, they admitted reluctantly, “but you’ve forgotten one thing. This machine, if placed outside for sale of stamps after hours, as you suggest, would contain quite a lot of money. The Post Office cannot risk public funds being left outside like that.”

According to the newspaper, Dickie returned home that evening ‘crestfallen’, but by the next day he had thought of a solution. He bought the stamps himself and took the money when the box was cleared. RJ Dickie, a true entrepreneur from the edge, was born. 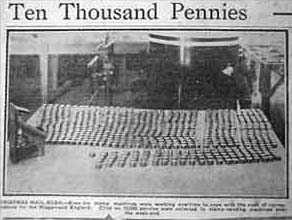 This arrangement naturally suited the Post Office, and in June 1905 an unknown Wellingtonian was the first person in the world to buy a stamp from an automatic vending machine. The machine was popular and, on the whole, successful, although it was withdrawn after two weeks because some members of the public tried to ‘cheat’ the machine by using foreign coins, damaged coins, lead discs and other foreign objects, thus damaging the mechanism. It was fixed with some minor adjustments by Dickie and by July was once again outside the Post Office. During its first fortnight of use, it had sold 3,901 one-penny stamps.

Selling to the World

In 1906, Dickie sailed from Wellington to San Francisco on board the SS Sierra. He was working as a mail agent, but took his machine with him with hopes of securing the US patent. During the trip, a wealthy and business-savvy Tasmanian woman, named Georgine Kermode, approached Dickie and asked about the international rights for the machine outside the US and Commonwealth. They started a successful partnership with Dickie selling the machine in Britain, the US, Australia and New Zealand and Kermode owning the Continental rights. Together they had a winning product and also came up with novel and effective marketing ideas. In 1907, in an attempt to gain British approval for the vending machines, Dickie had one of the machines set up in the lobby of the House of Commons where, according to the 1960 Dominion feature, it was a popular curiosity:

“Frock-coated members stopped and stared as they passed through the lobby… like children at the fair, the venerable Edwardians could not resist the temptation to try out the world’s first practical stamp-selling machine.”

Although the Wellington machine proved successful, it wasn’t until 1910 that the Post Office decided to order more. By the time Dickie retired there were vending machines in use at almost all New Zealand Post Offices. At first the machines were manufactured in England and imported into New Zealand, until the demand was great enough and the New Zealand Government bought the New Zealand manufacturing rights. Dickie’s machine also made an impact in the US, a huge market even at the start of the century. At the 1909 Alaska-Yukon-Pacific Exposition in Seattle, when Dickie was aged 33, it won the Gold Medal, Grand Prize and diploma Against All-Comers. Dickie returned to New Zealand and the Post Office where he stayed until his retirement aged 55. Much of the rest of his working life was taken up with making improvements to the machine.

Dickie continued to tinker with mechanisms and machines, adjusting and readjusting prototypes and inventions; when he was interviewed by journalist Mac Vincent in 1951, he was in the process of inventing a more efficient coin chute for public telephones. Dickie’s stamp vending machines were in use around the world for more than half a century. In 1938, Dickie visited a factory in England where 800 men were employed building machines from his design; by that time 18,000 had been installed in Britain. The vending machine that Dickie invented was eventually succeeded in 1960. There was nothing wrong with the simple effective design or the solid brass workings; merely the new machines took three-penny stamps. Dickie’s machine was not adaptable to the new coins. RJ Dickie’s stamp vending machines continued to be used in New Zealand until 1960, two years after Dickie’s death in Wellington aged 82.

Thank you to Eric Adank for his comments and contributions. For an excellent feature on the life of Robert Dickie: Seaman, C. (1960) “New Zealand Led World with Machine to Sell Stamps”, Dominion, May 14. For a feature article about the machines that replaced Dickie’s original invention: Credited to special correspondent. (1960) “Selling Stamps Without The Jam”, Auckland Weekly News, March 2. For a short newspaper article following RJ Dickie’s death: (1958) “He Invented the Stamp Machine”, Auckland Star, August 28. For a news article about the introduction of Dickie’s machine’s into Australia: No writer credited. (1908) “Slot Stamp Machine”, Melbourne Argus, March 6. For a news article on the invention and the overseas patents: (1906) “Automatic Stamp Seller”, The Advocate, February 28. For a brief on the invention: (1905) A Stamp Selling Machine, July 28.