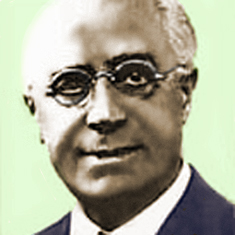 An innovator of many talents. During the 1930s he was a leading world expert on the internal combustion engine. He built power tools, eggbeaters, burglar-proof windows and hairpins. He was a champion sportsman, a fine musician and a talented painter – Ernest Godward was a brilliant over-achiever.

The son of a fire fighter, Godward was born in Marylebone, London, 7 April 1869. He was a sickly child and did not attend school until the age of nine, where he stayed only three years before running away to sea, working on a cabling ship sailing between Nagasaki and Vladivostok.

He was sent home on the orders of the British Consul. Returning to London, he started an apprenticeship with a firm of hydraulic engineers and fire-engine manufacturers where he trained as a mechanic. Three years later he rejected this work-a-day life to set sail once again, this time as a steward on P & O passenger ships. His work at sea consisted mainly of odd jobs: he polished brass, scrubbed the decks and became the crew’s ‘napkin folding champion’.

Some time in the middle of the 1880s, Godward signed on with the “Nelson“, which landed at Port Chalmers, Dunedin in 1886. Although he would often be far from it, he called the South Island of New Zealand home for the rest of his life.

Godward worked as a photographer in Dunedin and also excelled in sports. He became a champion rower, cyclist, runner and swimmer. He later joined S.R. Stedman’s cycle business, and in 1893 branched out on his own. He moved to Invercargill where he became a partner in the Southland Cycle Works.

In 1896, at age 27, Godward married Marguerita Florence Celena Treweek and the energy Godward devoted to sports was now invested in family matters: the couple had 10 children. The Southland Cycle Works provided an income for the growing family but it was not mentally stimulating enough for Godward’s energetic mind. He started inventing; he would look at everyday household objects and think of ways to improve them.

By 1900 he had invented and patented an egg-beater that could prepare eggs for a sponge cake in three and a half minutes (before it had taken up to 15). He designed a new post-hole borer, a new type of hair curler, a burglar-proof window, a padded draught protector for doors, a hedge trimmer made from bicycle parts… the list was extensive and varied.

“As a schoolboy I remember our garden tools were a totally different shape from everybody else’s. Being young I thought it was because we were more important!”

In 1901, probably due to the influence of his wife, Godward invented the spiral hairpin. This predecessor to the hair clip, fixed itself to hair unlike the then common straight pin that required constant adjustment.

The spiral hairpin invented by Ernest Godward From Kiwi Ingenuity, A Book of New Zealand Ideas and Inventors by Bob Riley

The Spiral Hairpin was an immediate success and Godward left his cycle business and established Godward’s Spiral Pin & New Inventions Company. He was now a full time inventor. He travelled to America to secure patents for his inventions, forming the Merkham Trading and Koy-Lo Hairpin companies to take care of manufacture and distribution. Interest was high in the USA. One notable business associate, according to Shirley Walker, in her profile of Godward in the book Southern People, was American literary legend Samuel Clemens (aka Mark Twain). Clemens became Vice-President of the Koy-Lo Hairpin Company. Between 1900 and 1905, Godward made the trip from Invercargill to America five times. 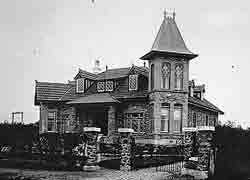 Keeping the New Zealand and Australian rights, Godward sold the America rights to the spiral hairpin for £20,000, a fortune in 1901. His other inventions were also practical and popular: 250,000 Godward-designed hair curlers were sold in Melbourne alone.

During this time Godward served on the Invercargill Borough Council (1903-1906) and built an impressive house which is still standing. He painted portraits and landscapes, played a variety of musical instruments and sang in local musical productions.  He was also an accomplished elocutionist.

In 1908 Godward started a motorcycle business in Invercargill, fitting the imported bikes with his own invention – a petrol economiser.

The economiser, known commercially as either the Godward Gas Generator or the Eclipse Petrol Economiser, was a generator placed between the carburettor and engine to produce a perfect petrol gas which did not condense, unlike the usual atomised spray. It was a close and important forerunner to the modern carburettor. 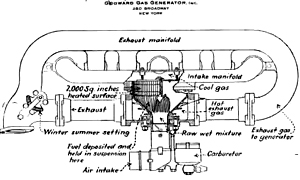 The ‘Godward Gas Generator’ From Kiwi Ingenuity, A Book of New Zealand Ideas and Inventors by Bob Riley

The economiser used petrol more efficiently than other engines at the time, achieving 36.3 miles per gallon.

Godward expanded his cycle business to include the importation of Reo cars, and his economisers worked as well in cars as they did in motorcycles.

He had an avid interest in cars, being an excellent driver and a keen promoter of South Island motor racing. With friend and fellow thrill-seeker Robert Murie, Godward won the widely reported Invercargill to Dunedin motor race in a car fitted with an economiser. The pair were also well known in Invercargill for their love of adventure, and in 1907 they piloted the first hot air balloon to take off from the southern town.

London authorities were interested in fitting their city’s buses with Godward’s invention and he travelled to Britain in 1913 to promote it. His English contacts were amazed that a man with no engineering qualifications could invent such a device. A factory was established at Kinston-upon-Thames to manufacture economisers, but contracts did not eventuate.

Godward returned home and, for the sake of credibility, studied engineering while continuing to refine his invention.

In 1916, at the age of 47, he moved to New York where he would base himself for the rest of his life. America saw the potential of Godward’s invention and in 1926 the United States army began using the Godward Vaporiser (as the economiser was then known). Trials showed that it allowed vehicles to run on kerosene, gasoline oil, fuel oil and even ‘bootleg liquor’ as well as petrol. It was more economical and reduced the risk of fire.

Ernest Godward From Kiwi Ingenuity, A Book of New Zealand Ideas and Inventors by Bob Riley

In 1929, the city of Philadelphia, one of the largest public transport operators in the United States, adopted the invention. Some 580 buses and 3000 taxies were fitted with the Vaporiser.

His work with these large organisations led to Godward establishing a permanent business premises in New York. From 280 Broadway, Manhattan he ran Godward Gas Generator Inc, manufacturing the Vaporiser under the advertising slogan “Power, Efficiency, Economy”.

Although he remained married to Marguerita, they were apart for much of their lives. Even when he based himself permanently in New York, she continued to live in Invercargill. Godward suffered heavy financial losses in the 1929 Wall Street crash, but continued to live and work in the United States.

He invented 72 models of the economiser and by the 1930s was recognised as the world’s leading authority on the internal combustion engine.

Godward died in 1936 on board the SS “Mongolia” returning home to Invercargill. He collapsed immediately after winning an onboard skipping competition: an overachiever to the last.

Godward is admired not only for his inventions; he had an acute business instinct, artistic talent and phenomenal sporting ability. A man from the edge who left a lasting legacy deep into the twentieth century.