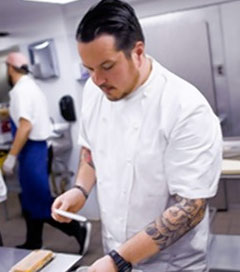 Auckland-born chef Matt Lambert’s new enterprise The Musket Room, is a “New Zealand-centric … upscale, casual neighborhood restaurant,” with “a wine list weighted to New Zealand selections beyond the usual sauvignon blanc and pinot noir”, The Wall Street Journal’s Lettie Teague writes. “Supporters of the restaurant’s Kickstarter campaign got in on the action last winter; The Musket Room’s owners put up a $20,000 request to open the restaurant. By the end of February, they had received far more than that figure: $25,636, to be precise. But can one actually open a restaurant in New York on Kickstarter funds alone? I posed the question to Musket Room co-owner Jennifer Vitagliano (Lambert and his wife Barbara are her partners). Vitagliano said the Kickstarter program represented only about 3 per cent of the cost, but it helped with building the garden in the back. (It’s a lovely spot that’s currently off-limits to diners.) Lambert has been a New York resident for seven years. As he tells it, he followed an American girl home to Connecticut, where she told family and friends that Lambert was her “souvenir.” Lambert is a veteran of several high-profile New York restaurants, including Saxon + Parole and Public. His “modern New Zealand” menu features Asian-inspired fare and seafood dishes that include appetizers like cold smoked scallops, cucumbers and pears; sea beans (seeds that are carried by streams and rivers into the sea); and a mushroom custard with raw mushrooms and herbs. Entrées include fanciful-sounding dishes such as venison ‘with flavours of gin’ and the proverbial ‘chicken and egg,’ as well as gnocchi made out of tofu sourced from nearby Chinatown.” Auckland-based master sommelier Cameron Douglas was asked to “put together a list that featured lesser-known New Zealand wines as well as better-known brands.” “[Douglas] chose wines that would work with Lambert’s ‘textured’ dishes, he explained, and that diners could navigate without needing to talk to a sommelier. The 2010 Milton Vineyards Chenin Blanc was simply outstanding.”