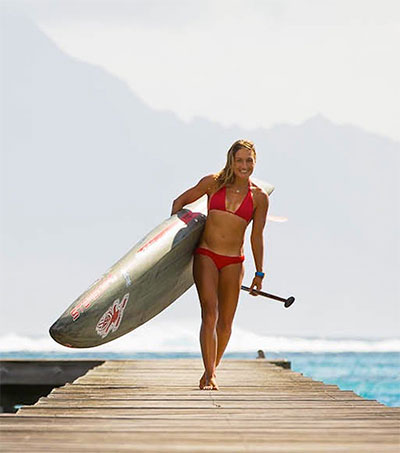 Champion standup paddler Annabel Anderson, who is originally from Wanaka, is the latest sports star to join Air Tahiti Nui’s ambassador ranks with the New Zealander looking forward to further finessing her sport in one of the world’s leading paddling destinations, the islands of Tahiti.

In line with the airline’s other sporting ambassadors, Anderson is a champion and a role model, considered the most dominant athlete in the sport of standup paddling – male or female.

Anderson has been the SUP world number one since 2012 with 2017 proving to be one of her most successful years yet. Her titles so far this year include International Surfing Association Long Distance World Champion and Long Technical World Champion, as well as Pacific Paddle Games Long Distance, Technical Champion and Overall Champion, Salt Life Cup Champion and SUP Magazine’s Female Athlete of the Year award. Anderson regularly outperforms elite male racers, including crossing the line 15 minutes before the closest male paddler at Bermuda’s Devil’s Isle Challenge.

California-based Anderson competes all over the world in SUP, but said nowhere compares to Tahiti.

“I am frequently asked where my favourite place to paddle is and Tahiti is always my answer.”

“There is something about the contrast of the land against the ocean, the clarity and stillness of the water and the warm, friendly nature of the people that combines to make a really magical place. There really is nowhere better to paddle,” Anderson said.