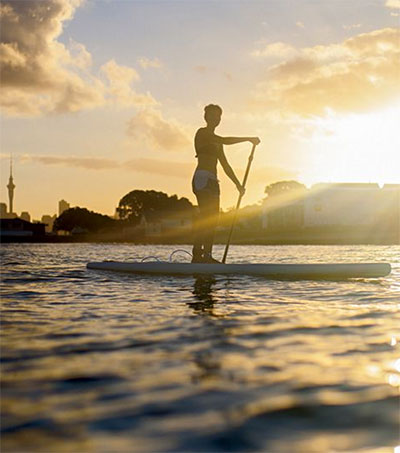 Auckland and Stand Up Paddling a Perfect Match

Auckland has been named one of the world’s top eight paddling hubs by readers of the UK’s SUP magazine.

“Take one look at New Zealand’s largest city on a map and it’s no surprise that Auckland and SUP are a perfect match. Large bays and inlets sprawl through the city that is sandwiched between the Tasman Sea to the east and the Hauraki Gulf to the west. For paddlers that like to mix it up, Auckland provides the opportunities to get on the water in countless ways,” Jack Haworth writes for the publication.

“For flatwater fans, no spot is more iconic or popular than Takapuna Beach. It faces the beautiful volcanic island of Rangitoto, which doubles as a blockade from South Pacific swells. Beginner paddlers can go easy in the sheltered and shallow waters of Point Chevalier, while both Mission Bay to the south and Castor Bay to the north are both popular among the paddling faithful.

“Paddlers looking for a little more excitement only need to wait for the wind to rise, which it often does. Downwind paddling has exploded in New Zealand and depending on the wind direction, the Hauraki Gulf offers several different runs frequented by paddlers, most of which end in the Mission Bay area. Mainland runs include a trek south from Murray’s Bay, a run north from Beachlands and a run back to the mainland from Waiheke Island’s Huruhi Bay.

“While New Zealand is world-famous for its waves, Auckland is protected from swell by the islands. The closest SUP-friendly wave is at Orewa, which is only a half-hour drive north from Auckland. Meanwhile, a 40-minute drive to the west coast will put you at the shifty sand bars of Muriwai, and within an hour, there are almost too many options to choose from.

“With a friendly population, endless water and myriad landscapes to explore nearby, the City of Sails is enough to make any paddler swoon.”

This article was originally published in the summer 2018 issue of the publication.