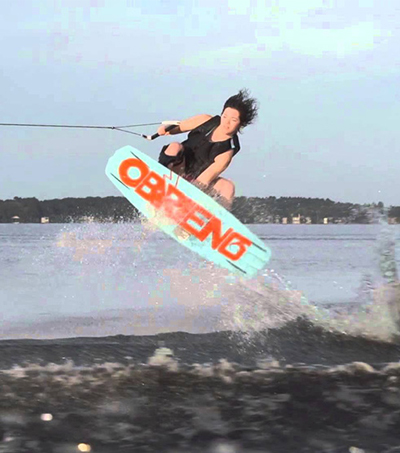 Waikato University Hillary Scholar Morgan Haakma has won her first world title at the 2017 Nautique WWA Wakeboard World Championships. Competing in the Amateur Women’s division, Haakma won “with a stand-up run filled with multiple 180 and grab combinations, punctuated with her first backroll in competition,” as reported in an official statement.

Of her win Haakma said: “This has truly been one of the most amazing experiences of my life and I am incredibly thankful for every moment”.

Haakma says her biggest inspiration is pro-wakeboarder and world champion Brad Smeele, who became quadriplegic as a result of a training accident in 2014 and coached her in her junior competition years.

“I’m so proud to see Morgan reach her dream of becoming a world champion! I’ve watched her work incredibly hard over the years to progress her riding, rising through injury and blood and sweat and tears. I’ve never worked with anyone more determined, and it’s so amazing to see that take her to the top of the world,” said Sneele.

The Nautique Wake Series is dedicated to “progressing the sport from the ground up”, “developing the stars of tomorrow and showcasing the top athletes of today with every major event held behind the Super Air Nautique G23.” It “is the only event series that gives riders of all ages, gender and skill level the opportunity to compete at an elite level.”

Former Sacred Heart Girls’ College student from New Plymouth, Morgan Haakma is in her third year studying a Bachelor of Health, Sport and Human Performance at the University of Waikato. She is currently based in the United States where she is engaged in a Waikato OE programme at the University of North Carolina, Wilmington.