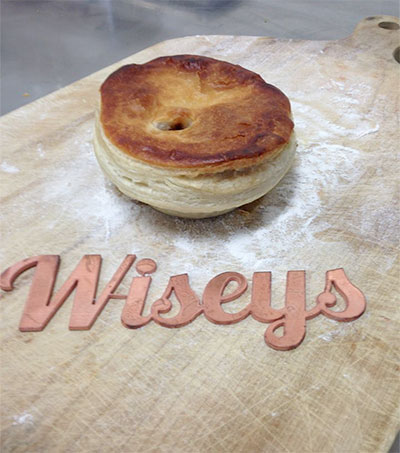 Wiseys Pies & Bakehouse has an interesting pedigree. Opened earlier this year, it’s owned by New Zealander Gary Wise, who started his career at the age of 12 cleaning trays and prepping for a local baker.

He’s overcome some major hurdles to perfect his New Zealand-style sweet and savoury pies for the Canadian market.

And in Windsor, California, Warren Burton’s BurtoNZ Bakery opened on 1 December, “a cause for celebration” according to local paper the Press Democrat, “overwhelming the owners and pretty much clearing out the bakery case by noon.”

“The newly minted bakery is a labor of love by the couple, who raised nearly $40,000 on crowdfunding website Kickstarter from friends, relatives and supporters who wanted to see authentic meat pies – flaky-crusted mini pies with steak and potatoes, cheese and mushrooms or bacon and eggs stuffed inside – along with sausage rolls and Wattie’s sauce (a sort of spiced ketchup), custard pies, breads and other traditional bakery goodies arrive in Sonoma County.”