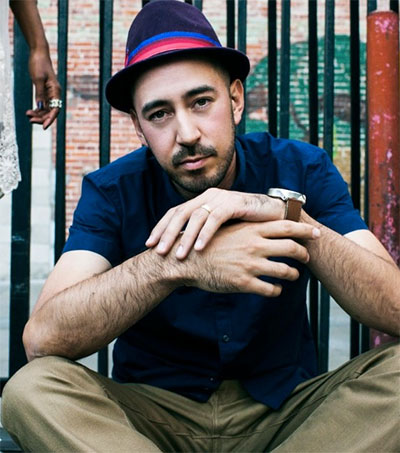 Auckland-born Mark de Clive-Lowe, 44, is “a jazz artist with both a visionary outlook and an old soul. As a concert pianist deeply steeped in the jazz tradition, he’s courageously committed himself to modern forms of hip-hop and electronic music.” Simon Rentner and Colin Marshall report for a Nevada Public Radio (KNPR) slot.

“He recognised early that playing 88 keys the way his elders before him did couldn’t satisfy his creative aspirations of living in the present. So, in his mid-20s, after already achieving serious accolades in pianism, de Clive-Lowe abandoned his first instrument to learn the ways of a modern beat maker,” Rentner and Marshall write.

“The half Japanese, half New Zealander hunkered himself inside London’s burgeoning broken beat music scene for more than a decade and began to master the innovative ways of improvisational electronic artists. There, he experimented on a wide range of samplers, sequencers, synthesisers and sound manipulation devices which allowed him to take his jazz predilections and reprogramme them for a rave dance hall. The result is an intoxicating form of jazz-fused hip-hop house music.

“After achieving success in this new frontier of music-making, de Clive-Lowe’s artistry has now reached a new apex. He has re-committed himself to the acoustic piano, only this time, with his full arsenal of gadgets as an electronic artist.

“As we showcase in this Jazz Night In America video, there’s nobody else quite like de Clive-Lowe. He is able to employ disparate musical strategies in an improvisational jazz space and compares his concept to ‘the needle drop’ as it is referred to in the most urgent forms of hip-hop. In a typically chaotic jazz setting, prone to unexpected shifts and improvisation, de Clive-Lowe quickly identifies and reformulates loop patterns by sampling himself and his bandmates, creating an otherworldly montage of soundscapes while also evoking a deeply visceral dance experience.”

De Clive-Lowe performs in Padua, Italy on 8 November and in Barcelona and Madrid, Spain on 16 and 17 November respectively.