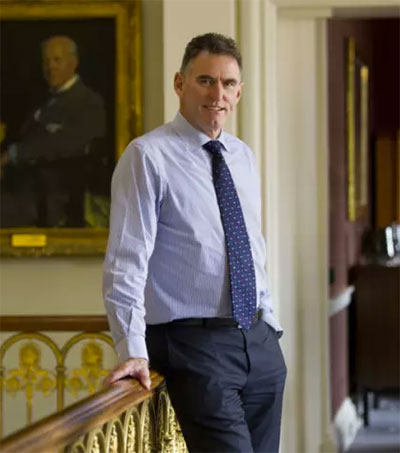 Straight-talking New Zealander Ross McEwan has been at the helm of Royal Bank of Scotland since 2013, working to try and rebuild its tattered reputation and repay the £45bn of public money required to stop it going bust in 2008. The bank is getting there, he tells the Scotsman’s Janet Christie, but there is much still to do.

McEwan doesn’t mind if you call him old fashioned. In fact he likes it. The CEO uses the epithet several times when we meet in the august surroundings of the Royal Bank’s 36 St Andrew Square head office in Edinburgh. “Look, call me old fashioned,” he says, when the conversation turns to recent stories around his dislike of zero interest credit card deals, “but I like people paying back.”

McEwan’s attitude to money was formed back in New Zealand, where his mother was a shop assistant and bequeathed him her financial mantra. “‘It’s not how much money you have, it’s what you do with it’ she used to say. We wanted for nothing,” he says, “but she was frugal.”

McEwan, 60, is approachable, but isn’t afraid to say no when it’s required. “I think that’s something we as banks forgot to do and why we ended up in crisis. Tell people why, but if the right answer is no, that’s the answer.”

As for zero interest credit deals, he wants more information about the charges, penalties and rate hikes. “With these products, around 50 per cent of people get to the end of the time and roll again. And when the rate changes, 60 per cent don’t even know what it’s going to change to. To me that’s fundamentally wrong.”

McEwan is optimistic, with the bank – Scotland’s largest private sector employer with 10,500 of 92,400 staff based here – reporting an operating profit for the second quarter of this year of £1.2bn compared to a £695m loss in the same quarter of 2016, a 24 per cent rise in income and 32 per cent fall in operating costs compared to the previous year.

McEwan’s name has recently been linked to the top job back at the Commonwealth Bank of Australia but when Christie met McEwan he wasn’t talking about any moves. “I’m here while the board wants me. I want to see the bank on a really strong path to focus on customers and making money and starting the government out process. That would be important for me. I’d love to see the Scottish people really proud of this bank again, because it’s their bank and the UK public saved it. The biggest reward for them is to have a good bank back.”