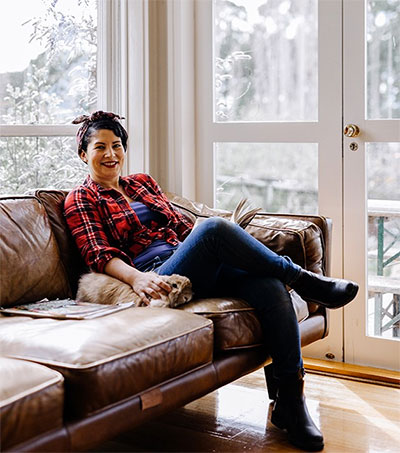 Auckland-born Analiese Gregory is one of Australia’s most-talked-about young chefs. She heads the kitchen at Hobart restaurant Franklin. Sydney chef Peter Gilmore, who mentored her as his 2IC for four and a half years at his acclaimed restaurant Quay, says Gregory is “the most serious and dedicated young chef” he’s ever come across.

Aside from being a step closer to fulfilling her dream of having a garden, making wine and growing vegetables, she says the decision to pick up sticks and move from Sydney to Tasmania came down to headspace. Her relocation comes at a time when many in the trade are questioning the effect gruelling hospitality hours can have on mental health, self-esteem and creativity.

Fellow New Zealander chef Ben Shewry just announced he had reduced the working week to 48 hours for his staff at Attica, his Melbourne fine-diner. The new roster – four days on, three days off – is a bid to preserve balance and healthy dynamics between chefs and their partners, friends and families.

Gregory lives 40 minutes south of Hobart between Woodbridge and Birchs Bay. Country life suits her. The house, owned by Franklin owners, the Lindells, is surrounded by vineyards and has a garden that Gregory has planted with horseradish and celeriac, okra, lovage and sweet cicely.

“It’s ridiculously beautiful and the air is super-fresh,” she says. “You wake up and you can see the ocean and the beds from where our oysters for the restaurant come from.”

Apart from Peter Gilmore, Michel Bras, of restaurant Bras in France’s southern Massif Central, has had the most influence on Gregory.

Gregory’s experiences in France still serve as her yardstick for how to survive – and thrive – in a difficult field. Mornings in the Aubrac were spent in the Bras family garden picking grapefruit marigold, daylilies, sansho and radishes for the restaurant. This would be followed by coffee and pastries at an old wooden table with Bras’ 100-year-old whisks hanging above their heads and a fire going. “None of it’s for Instagram or for show,” Gregory says. “These people made the restaurant the centre of their family. And found a way to make it sustainable.”

Being in a smaller city like Hobart and closer to such great produce, she says, has put her more at ease in the kitchen. She folds Bruny Island sea urchin and wild fennel through linguine, dices raw Highland beef to go with salt-baked celeriac and toasted buckwheat, and teams housemade burrata curd with Jerusalem artichoke that she’s fermented and fried.

Even with numerous projects on the go, like cheesemaking, Gregory still makes time each Sunday to be by herself. It might mean driving to a fish and chip shop “in the middle of nowhere”, or taking herself hiking until she’s “calm and normal” enough to return home. “Being a restaurant chef is a love-hate thing,” she says.