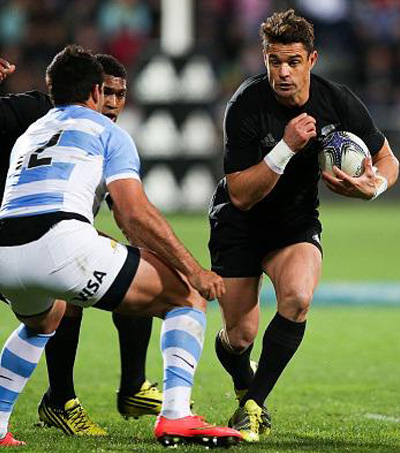 All Blacks Dominate Argentina in Christchurch

Captain Richie McCaw scored a try and stand-off Dan Carter kicked 14 points in their last home Test at AMI Stadium in Christchurch as the All Blacks beat Argentina 39-18 in the opening match of the Rugby Championship.

McCaw scored the first of New Zealand’s five tries in the 20th minute, while Carter kicked six goals from nine attempts to lift his world record points tally to 1,491 points in 104 Tests.

Carter will quit New Zealand rugby after this year’s World Cup to play for Racing Metro in France, while McCaw will retire after leading the All Blacks in their World Cup title defence in September.

McCaw’s 25th try in his 138th Test put the All Blacks up 11-3, as they worked hard to break down Argentina’s defence. Their relentless attacking pressure paid off as they scored three tries – by Ma’a Nonu, Charles Piutau and Kieran Read – in a nine-minute passage on either side of half-time to inflate their lead to 32-6 by the 48th minute.

McCaw was pleased with the All Blacks’ performance. “That was definitely a step up from [the win in Samoa]. We played some pretty good rugby at times,” McCaw said.

New Zealand next plays South Africa in Johannesburg on July 25, before taking on Australia in Sydney on 8 August.