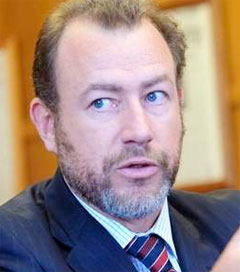 General Motors chief financial officer, New Zealander Daniel Ammann, talks with The Detroit News editorial board about how the automaker’s goal is consistent profitability in a cyclical industry. After a historic bailout and Washington-managed bankruptcy, General Motors has been reborn as a moneymaker with low debt overhead, good cash flow, a portfolio of fresh products and best-selling vehicles in the world’s fastest-growing car market, China. Now comes the hard part: The new GM must translate its success into long-term, consistent profitability.

Ammann said the General has learned its lessons and is a lean, mean fighting machine retooled for battle in the global market. “We have to have a very strong financial foundation to the company. We all understand what happened in the past and we want to make sure it doesn’t happen again,” said Ammann, a New Zealand-born 41-year-old who is a testament to GM’s new culture. An 11-year veteran of Morgan Stanley brought on board three years ago, Amman is a Nurburgring-test track licensed motor-head who defies the inbred GM financial culture that design guru Bob Lutz once derided as having “bean counter-itis.” Riding a product revolution that was in the pipeline before the company’s 2009 cash crisis, GM is rolling out its most diverse lineup in recent memory – from snappy compacts to sexy Cadillac luxury sedans to its bread-and-butter work trucks.