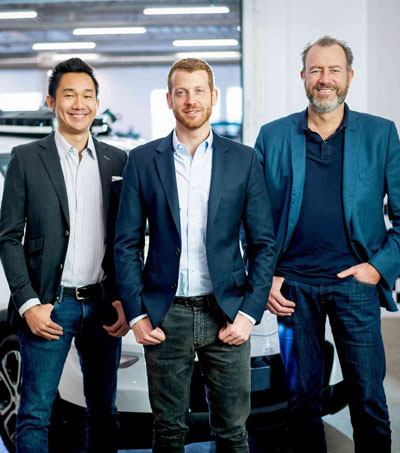 “Days after General Motors CEO Mary Barra unveiled a major restructuring”, “the auto giant said President Dan Ammann will be the new head of its Cruise self-driving car company, which she says is key to its future.” “Ammann, who oversaw the acquisition of Cruise in 2016, becomes the San Francisco-based company’s new CEO as of January 1.” Alan Ohnsman reports for Forbes.

“Barra has said Cruise will begin operating a robo-taxi service in 2019, without specifying the first city.”

“As we move toward commercial deployment, adding Dan to the strong team led by Kyle is the next step,” she said in a statement.

“Cruise, which tests its fleet of self-driving Chevrolet Bolt electric hatchbacks mainly in San Francisco, has become a key rival in autonomous technology to Alphabet’s Waymo, which is launching its robo-taxi service in Phoenix this year,” reports the article.

“Cruise has grown from about 40 employees when GM bought it to more than 1,000 currently. It’s still expanding, with plans to add up to 200 engineers at a new office in Seattle, the company said.”

New Zealander Ammann “has long led the automaker’s charge into autonomous vehicles, so it was predictable and rumored for some time that he would head the company,” said Michelle Krebs, executive analyst at Autotrader.

Ammann declined to comment on when or even if an IPO was in the works. “All the energy right now is focused on solving this greatest engineering challenge and getting this technology commercially deployed,” he said. “We’ll look at other opportunities along the way.”

“If there is an IPO, Ammann is particularly qualified to oversee it. A former Morgan Stanley investment banker, he joined the post-bankruptcy General Motors in 2010 as its vice president of finance and treasurer, and managed the carmaker’s IPO. He was promoted to president in January 2014, and has been responsible for managing global operations, captive finance company GM Financial and Cruise,” writes Ohnsman.

A Stuff report from 2011 records that Ammann grew up on a farm in the Waikato. After schooling in Eureka and Hamilton he studied management at Waikato University, graduating in 1994 with a Bachelor of Management Studies with first class honours.

His career in New Zealand investment banking began when Chris Liddell, the Kiwi he succeeded at GM, hired him as an analyst and associate in the banking team at Credit Suisse First Boston in 1993.

After leaving New Zealand in 1997 for New York, Ammann continued working at Credit Suisse before shifting to Morgan Stanley, being appointed a managing director of the bank in 2004. During his 11 years with Morgan Stanley he covered the automotive industry, with General Motors as one of his clients.