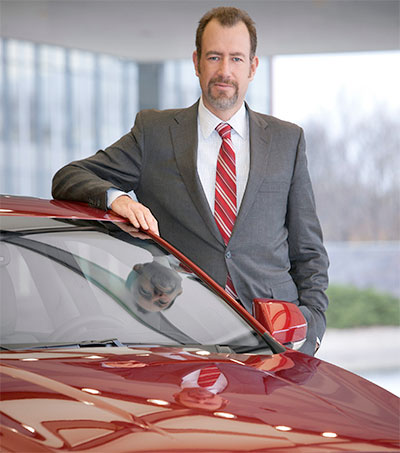 New Zealander Dan Ammann, 42, president of General Motors is one of the fastest drivers in the company, as reported in The Telegraph, and holds a coveted level-six driving licence, which allows him to test cars at the Nürburgring.

For his first ever visit to Goodwood Festival of Speed, he was behind the wheel of the new £55,000 Vauxhall VXR8 saloon, with a 576bhp supercharged V8 from the Chevrolet Camaro shoehorned into the bodyshell of the Holden Commodore. It’s capable of getting from 0-62mph in just 4.2 seconds – provided you can keep the rear tyres connected with the tarmac.

Ammann was managing director of investment bank Morgan Stanley and in 2009 advised the GM board over its post-bankruptcy restructuring. Then, as he puts it, “The advisor became the decider,” when in 2010 he took up a position as vice-president of finance and treasurer. In 2011 this banker turned car maker was appointed chief financial officer and in January this year took up the role as GM’s 22nd president since George E Daniels, working with chief executive Mary Barra and the board of corporate officers.

The Telegraph reports that Ammann has been on a series of goodwill visits, recently visiting China and now the UK, where he endorsed the current management of Opel and Vauxhall and progress of the recovery plan for its previously troubled European subsidiary.

GM has been embroiled in a safety crisis over millions of faulty ignition switches, which have been attributed to 13 deaths in the US, a fine of $35 million for failing to recall faulty cars earlier and a 2014 recall of 29 million vehicles. Amman told The Telegraph, “How we deal with this, and what we do about it, will define our time at the company. We need to configure the business to ensure it never happens again.

“The cars affected by this came from 10 to 15 years ago when technical development was growing dramatically. Electronics demanded a completely new level of integration across the industry and with new high-volume modular strategies, there was a potential for more things to go wrong and, if they did, it would affect a lot of vehicles. So apart from putting things right, we need to gain a perspective on a whole host of issues, from component-level integration, to entire systems level integration.”

GM defied the negative publicity with its latest sales results, announcing that its sales in June rose by 1 percent over the same month a year earlier, to 267,461 vehicles sold, and keeping pace with an overall strong industry performance. Analysts cited several reasons for GM’s performance such as a stronger economy, demand after the bad winter, and the recalls themselves — which drew people into dealerships.