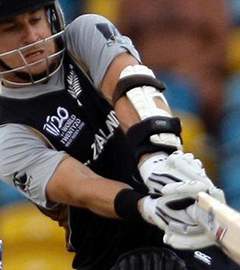 Nathan McCullum’s job when he got on strike in the final over against Sri Lanka was dauntingly simple: smite 17 runs from the final four balls delivered by Rangana Herath. That’s a boundary a ball off one of the best one-day left-arm spinners in the world – and one of them has to go for six.

For McCullum’s first ball, he stepped back to leg and smashed the full-length ball high over extra cover for six runs. He again backed away to leg to the next delivery and just managed to clear the cover fielder: four runs. Seven runs needed off two balls.

Herath delivered his third ball and McCullum cleared his front leg and hit through the line to register a six over long off, a terrific strike. The scores are tied.

The final delivery was a full-toss, which he swatted over long-on for another six. In total, 22 runs off four balls.

The Black Caps now head to Dambulla for the final game of their three-match series up 1-0, following the first game wash-out. It is a welcome turn-around for a team that suffered a whitewash against Bangladesh last month.

What made the victory more notable was the target was revised under the Duckworth-Lewis system after rain and lightning stopped play. Sri Lanka had scored 138 runs off 23 overs, which was then amended, so that New Zealand had to chase 198 runs from only 21 overs.

Other notable performances came from young allrounder Tom Latham (86 runs), Australian-born wicketkeeper Luke Ronchi (49) and Kyle Mills (1-16), who maintained his freakish ability of taking a wicket in his first over.