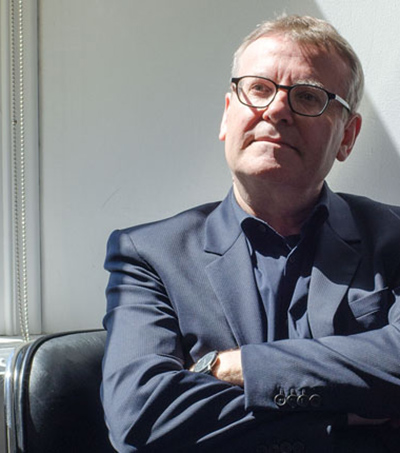 New Zealand-born Mark Wigley has stepped down after 10 years as dean of the Graduate School of Architecture, Planning, and Preservation (GSAPP) at Columbia University. Under his leadership, the school has built on its legacy of experimentation and expanded its global influence, notably with the Studio-X network, a collection of design laboratories and event spaces in Beijing, Mumbai, Istanbul, Johannesburg, Rio de Janeiro, and New York, with smaller-scale operations in São Paulo and Tokyo.

Climate change, urban population booms, and radical technological innovations have prompted a great deal of self-examination and curricular adjustments in schools of architecture worldwide, and Wigley has addressed these issues deftly. On a recent morning, he sat with Surface in his airy office at Columbia to reflect on his decade-long deanship and his efforts to connect the school to global concerns and networks. He spoke about what was fundamental to the education of an architect and what will challenge graduates in the years to come.

An architectural historian and theorist, Wigley studied architecture at the University of Auckland in New Zealand, where he earned a Ph.D. in 1987. He began teaching at Columbia in early 2000, after 12 years at Princeton University. Early in his career, he was co-curator (with Philip Johnson) of the 1988 exhibition “Deconstructivist Architecture” at the Museum of Modern Art, which featured work from an emerging vanguard of architects and firms. The lineup included Frank Gehry, Zaha Hadid, Coop Himmelblau, Daniel Libeskind, Peter Eisenman, Rem Koolhaas, and Bernard Tschumi, the last of whom Wigley succeeded as GSAPP dean.

After stepping down from his post, Wigley plans to take a sabbatical and then return to Columbia as a faculty member. He is currently at work on a book about Buckminster Fuller and the technology of radio.

The full interview by Michael Chen is on Surface magazine’s website, and covers the professional optimism inherent in architecture, resonance with the invisible harmonies of the universe, the enormity of scale and access in the contemporary world, enabling complexity to survive, what it means for us to live together when, by 2050 or so, 70 percent of the world will be living in cities and nobody has any idea what that means, and living in the architecture of radio waves.