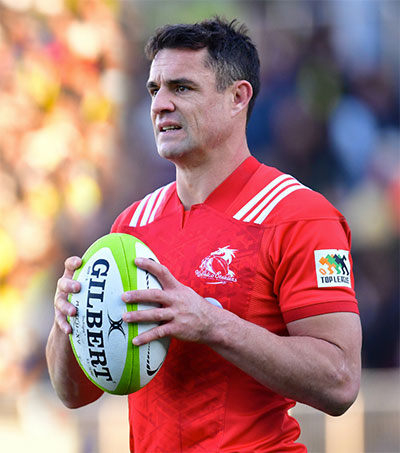 Why Dan Carter Is Still the Main Man in World Rugby

Dan Carter led Japanese team, the Kobe Kobelco Steelers to victory in the Top League final recently, and with that victory the former New Zealand fly-half wins over the hearts of yet another nation. Tom Parker reports for online sports site, RugbyPass.

“Carter played a pivotal role against his old foe Matt Giteau, where the Steelers thrashed the Suntory Sungoliath by 55-5,” Parker writes.

“This wasn’t a one-off performance by the 36-year old, as he was named as Japan’s MVP in the Top League this season. It’s easy to see why he deserves this kind of award. In the semi-final against Toyota Verblitz, Carter notched up an impressive 21 points with a try and four penalties.

“If that wasn’t impressive enough, the former World Player of the Year scored a massive 28 points in the round before that, in the sides 63-27 win over the Ricoh Black Rams.

“Carter is yet to have lost a game for the Steelers since he joined the club and it is a testament to the impact he has had on the team who were in second place when he arrived.

“It is fair to argue that since New Zealand won the World Cup final in 2015, Carter has carried with him a status as one of the best tens of all time. In a similar fashion to Jonny Wilkinson at Toulon, the New Zealander appears to have retained the most important aspects of his game which keep him competent at a high level.

“This illustrates how valuable an asset he is to any club, as he is a big name signing who has always been a consistent performer.”