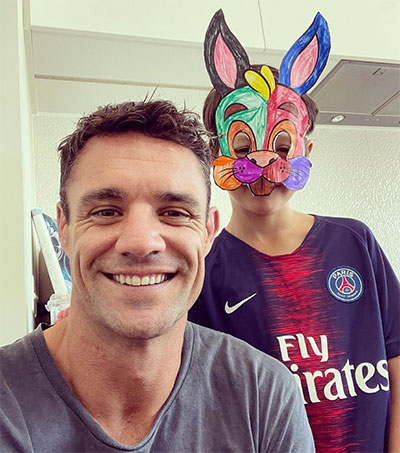 Former All Black fly-half Dan Carter “recalls his torturous relationship with the World Cup and reflects on a family-filled retirement” in an interview with Guardian rugby union writer, Michael Aylwin.

Do Carter’s three boys have any idea who their parents are? “If Marco’s being a bit cheeky, he’ll call me ‘Dan Carter’. When we were living in France, he had no idea what I was doing. But ask any of the boys, their favourite sport is hockey. Heavily governed by their mother.” Honor Carter was a hockey international.

At 39, Carter leaves behind a monument of a career, virtually without a chink from whichever angle viewed, one that will loom over rugby for generations. In a rapidly changing sport, it stands as one of the achievements of professional rugby’s early decades, Aylwin writes.

“We had the best of both worlds. When I started, there were a lot of traits from the amateur era. You were still playing for those beers afterwards. But the game changed pretty quickly – and it really has changed. It’s faster, the players are stronger. There’s so much more science. But you need fun, you need characters. If it gets too serious, it’s going to get stale. There has to be an off switch.”

Original article by Michael Aylwin, The Guardian, May 8, 2021.