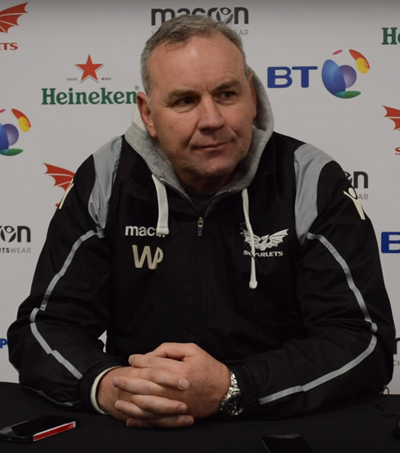 “Scarlets head coach Wayne Pivac will succeed Warren Gatland as Wales coach on a four-year deal.” BBC reports. “Gatland is stepping down after the 2019 World Cup in Japan and will be replaced by his fellow New Zealander.”

“We have secured the best man for the job and we have done so rigorously and decisively,” said Welsh Rugby Union chief executive Martyn Phillips.

“Pivac, 55, said he hoped to ‘protect’ the legacy left by Gatland, who is Wales’ longest-serving head coach,” according to the article. In his time Gatland “has led Wales to two Grand Slams, a Six Nations championship and reached the semi-finals of the 2011 World Cup.”

“What Martyn Phillips has achieved here is fairly unique in world sport. I have a further 12 months to dedicate my time to the Scarlets and, in the background, the necessary plans and preparations can be put in place to ensure a smooth transition after the World Cup,” said Pivac.

Gatland backs his successor. He said: “I’m determined to ensure Wayne is given the best possible opportunity to succeed in this job when he starts after the World Cup and I will do everything I can to help him.”

The announcement “marks a return to international coaching for Pivac, who was Fiji boss for three years from 2004 to 2007.”

“He then returned to New Zealand with the Auckland provincial team and was initially appointed assistant to Scarlets coach Simon Easterby in May 2014.” When Easterby left to become Ireland forwards coach Pivac took charge.

“His achievements include guiding Scarlets to the then Pro12 title in 2017 and being losing Pro14 finalists to Leinster last season.”