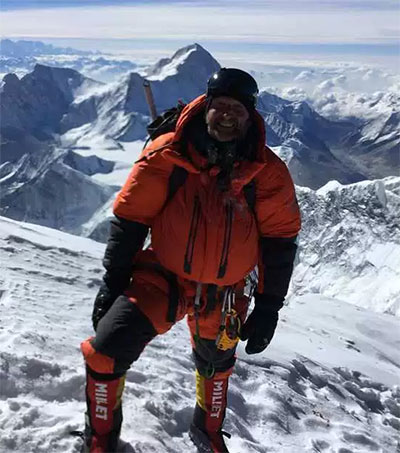 “There is a huge focus on self-care and self-preservation,” Erskine says.

“The minute you miss something you’ve got a problem, and a problem up there is a massive problem,” he says.

“In that environment, the slightest distraction will knock you off your game and things start to unravel.”

Love of the mountains came while growing up on a sheep farm outside Timaru, “in the shadow of Sir Edmund Hillary”, New Zealand’s greatest explorer and Everest’s first conqueror.

On a clear day, Mt Cook, was a mere dot on the horizon.

“When you are brought up in the southern alps of New Zealand you can’t not love the mountains,” Erskine says.

Yet his desire to climb mountains didn’t reveal itself until he was forced into retirement from an ultra-marathon career that saw him thrice conquer the gruelling 250km Marathon des Sables through the Sahara desert.

Among others, he’s raced across Death Valley, completed a 166km loop around Mont Blanc in the Alps and finished 29th in Canada’s own 125km Death Race through the Rocky Mountains.

After an eight-day mountaineering course ascent of Mount Rainier in June 2014, the entrepreneur franchisor and founder of Declare Brands, set off on his remarkable adventure that has also included skiing to the South Pole (which, along with skiing to the North Pole makes up another challenge called the Explorer’s Grand Slam).

He is currently on his way to Pakistan to climb one more apex: K2, “the mountain in the world … If you’ve summited K2 you’ve arrived somewhere.”