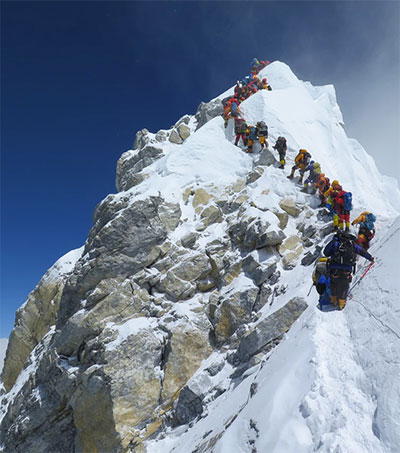 Everest for the Time-Pressed Executive

On the fourth week of their historic assault on Everest in 1953, New Zealander Edmund Hillary and Nepali Sherpa Tenzing Norgay were still establishing base camp after the long trek from Kathmandu. It would be a further six weeks before the men conquered the mountain. On the fourth week of his attempt to climb Mount Everest, 65 years later, Eduard Wagner was lying on a beach in Koh Samui, Thailand. The German businessman had completed his expedition early, after reaching the top on 21 May. “I could have been back at my desk in three weeks,” Wagner says.

The 40-year-old from Munich had joined the “Flash” – signifying high-speed – expedition offered for the first time this year by Furtenbach Adventures.

Everest has long since ceased to be the stage for heroes in the mould of Hillary or Norgay. Today the 8848-metre mountain stands as the zenith not of exploration but of the commercial adventure travel industry. Improved weather forecasting, better equipment, route-setting and abundant bottled oxygen have made it safer – as has the disappearance of the notorious Hillary Step, most likely as a result of the 2015 earthquake, now a gently-angled slope rather than a cliff. Big spenders who might previously have been put off a tougher or longer expedition are adding the mountain to their bucket lists.

Lukas Furtenbach, an Austrian entrepreneur and mountaineer based in Innsbruck, traces the rise of high-end Everest to New Zealander Russell Brice, whose Himex company raised the bar in the 1990s, when Everest became commercial.

Brice, an experienced mountaineer and expedition leader, established Himalayan Experience in 1996. He has guided in the Himalaya since 1974.

He has summited Cho Oyu seven times, Himal Chuli and Everest twice, as well as Manaslu in October 2010, which was his 14th summit of an 8000m peak. Brice has also successfully flown two hot air balloons over Everest.