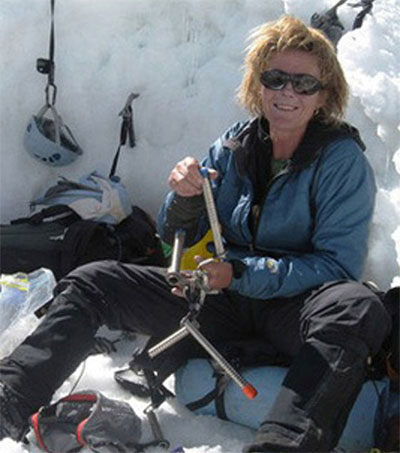 New Zealand mountaineer Pat Deavoll, 56, is planning ahead to 2017 when she will climb Tirich Mir (7708m), the highest peak in the world outside of the Himalayan/Karakoram chain. Ahead of that, she will head to Afghanistan and the Wakhan Corridor.

Over three decades Deavoll has forged a reputation as one of the world’s leading women mountaineers.

Largely unknown in her own land beyond the climbing community, Deavoll has beaten the mountains by beating the odds – she is heading high on a titanium knee, an ankle held together by metal pins and screws and the uncertainty of debilitating high-altitude sickness.

Her project for 2016 involves returning to the Wakhan Corridor in northeast Afghanistan, where she has climbed three times before. She is drawn she says by its isolation, rawness and physical challenges.

With new climbing partner Ted Callahan, an American based in Faizabad, the region’s provincial capital, Deavoll is attempting the first traverse of 7017m Koh-e-Langua-e-Barfi and the 7072m Koh-e-Langar, two striking remote peaks which have been climbed just once. The ridge which connects them has never been crossed.

The couple will be climbing alpine style, an approach to mountaineering summed up by the phrase “a rope, a rack and a pack on their back”.

She has scaled icefalls in Canada, hard routes in Alaska, remote peaks in China, seldom-visited ranges in India, soaring summits in Pakistan and now, once more, Afghanistan.

Deavoll has written about her climbing career in Wind from a Distant Summit, an unflinching account of success and failure in the mountains, her decision to put climbing ahead of having a family, the tragic loss of mountaineering colleagues and her struggles with depression.

In the mountains she finds an “overwhelming comfort”, where daily anxieties are replaced by a need to be physically sharp and in tune, where an exhausting haul on the front points of crampons can give way to exhilarating pleasure at the top.