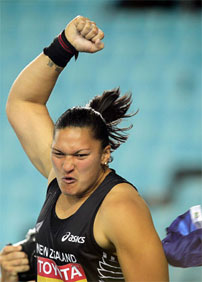 Smashing Out a World Record

Rotorua-born Valerie Adams has won shot put gold at the World Championships in Daegu, South Korea hurling a huge 21.24m, a world championship record-equalling throw and Adams’ third successive world shot put title. The winning margin of 1.19m over great rival Nadzeya Ostapchuk of Belarus was the widest in the history of the event, Adams’ personal best and a New Zealand record for the longest throw outdoors in 11 years. “I am mad, I am so happy. I have made so many sacrifices, been away from home for such a long time,” Adams said. “What gave me the kick for the last attempt? I knew that I had 21 metres in me and I had to get it out, I simply smashed it out,” she said. Adams, also the Olympic and Commonwealth champion, is just the second three-time winner in the event, matching the record of German great Astrid Kumbernuss.