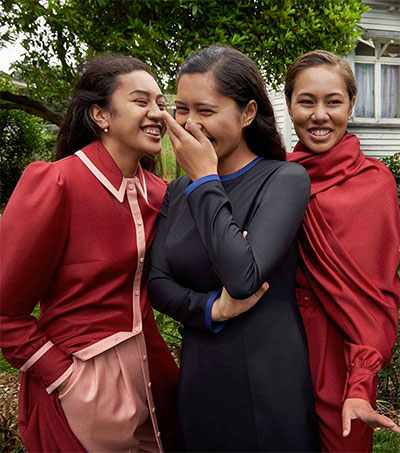 When London-based designer Emilia Wickstead took inspiration from her native New Zealand to create a capsule collection with The Woolmark Company, it seemed fitting that she should ask her fellow countrywomen to model it. In Vogue’s May issue, she tells Kate Finnigan how she brought together an Olympic shot putter, a High Court judge and 18-year-old Polyfest dancers, amongst others, for one very special portfolio.

“I’m a big believer in knowing where you come from and where that’s taken you,” Wickstead, 35, says.

When she opened her original Pont Street shop (now relocated to Sloane Street), the designer employed only two machinists, a PA and two shop assistants – one of whom was Wickstead herself for five years, six days a week. Now she has 40 employees, and a burgeoning international presence. Wickstead’s clothes are worn on the red carpet by stars including Olivia Colman and Alek Wek (the frock – adorned with a giant bow – that the model wore at the Fashion Awards in December had to be one of the looks of 2018), and by women of public stature, not least Jacinda Ardern, Prime Minister of New Zealand, Michelle Obama and the Duchesses of Cambridge and Sussex.

“With every collection you design, you dream up a world, but with this, I thought, ‘Wouldn’t it be great to focus on something that felt really real?’” she says. “I thought of home and I thought of women and clothes they could wear every day. And I saw it as a chance to tell people a bit more about who I am and where I come from.”

And so, on 28 November 2018, 125 years to the day since the women of New Zealand took to the polls for the first time after winning the right to vote, Wickstead arrived in her home country to photograph 12 ordinary, yet extraordinary women. They range from Katie Milne, the first female president of Federated Farmers in its 118-year history, to Selina Tusitala Marsh, the country’s Poet Laureate; from Valerie Adams, the two-time Olympic gold medal-winning shot putter, to Ngahuia Te Awekotuku, the first Maori woman in the country to become a university professor. “The youngest girl we photographed is a 13-year-old dancer and the oldest woman is the international judge and former Governor-General, Silvia Cartwright,” Wickstead says, beaming. “It was a total passion project and I cried at every shot!”

A percentage of the garments in the collection will be given to charities that help women back into the workplace.