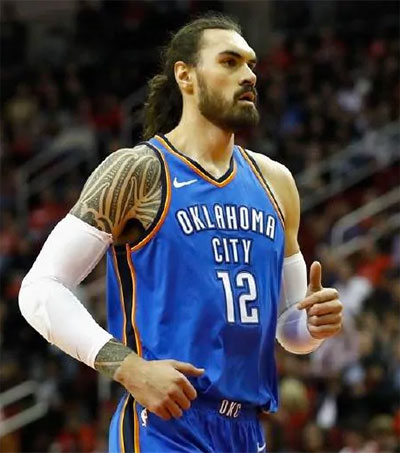 The days of the NBA’s powerful big men are slowly dwindling. Players like Detroit Pistons’ enforcer Bill Laimbeer and the Chicago Bulls’ Dennis Rodman have been effectively pushed out of the game with rule changes and officials calling for more fouls today than the past 30 years. Skill and speed is replacing power and physicality, but not everyone is taking that change to heart. One of those players is Oklahoma City Thunder centre, New Zealander Steven Adams.

While he might look like a Game of Thrones character, the 25-year-old from Rotorua is developing into one of the best big men in the game, and he’s having a career-best year in 2019. Known for his toughness and durability, Adams is proving that the day’s of the NBA’s enforcer are far from over. I mean, you’d likely take on that identity if you were the youngest of 18 children, too.

Adams’ siblings include older sister Valerie Adams, a three-time Olympian in the shot put for New Zealand. She was a two-time Olympic gold medalist in 2008 and 2012, then followed that with a silver medal in 2016. The four-time World Champion has earned 15 gold medals at major international competitions during her career. Also, Warren and Sid Jr., as well as four other brothers, all played professional basketball in New Zealand.

Adams remembered being severely bullied by his older brothers growing up and his only defense was to cry. That would ultimately bring his Dad into the picture to help save him. Over time though, Adams’ bond with his 17 siblings grew even tighter.

Standing 6-foot-5 at 14 years old, Adams would begin to learn the game of basketball in a stable environment despite it being almost six hours away from his family life.

“I just got addicted to getting better. My coach gave me a goal to get a tip dunk in a game – you know a putback dunk off a rebound. I had never done that. He told me that he’d get me a pair of new shoes if I did it. I just kept trying. I couldn’t get it, couldn’t get it, couldn’t get it. It took me a year or so. Finally one game, I got it. It happened. I was really pumped, I felt really good. When it finally happened, I didn’t care about the shoes. From there, I got addicted to that success, that accomplishment.”