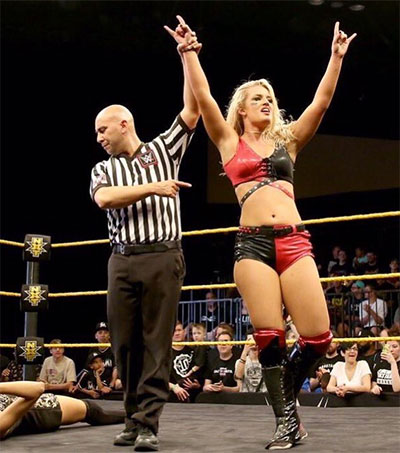 Sluggin’ It out with Wrestler Toni Storm

Auckland-born Toni Storm, 26, has wrestled in 13 countries, by her count, but the Mae Young Classic is her first experience in World Wrestling Entertainment (WWE), and when she first came to the WWE Performance Center in July this year she almost felt like she had to pinch herself.

Not only had Storm been picked as one of 32 entrants in the elite Mae Young Classic women’s tournament, she got to train with her fellow competitors at the state-of-the-art facility in east Orlando.

“I have come from filthy mats that have never been washed; sweaty, disgusting, far too hot dojos or units in the UK; horrible atmospheres,” Storm said in an interview at the Performance Center. “You leave and you smell for days. To come here is a luxury. It’s like a 5-star hotel.”

Storm is one of the most highly decorated women who has never worked for a US promotion – in fact, before WrestleMania weekend, when she worked for Progress Wrestling at Orlando Live Events in Casselberry, she had never wrestled in the United States during her 13-year career. But she said WWE has always been her dream, since she first became a fan watching on TV at age 10 on the Gold Coast in Australia.

“At the beginning, my family were like, ‘Are you really into this wrestling thing?’ They weren’t the biggest fans,” Storm said with an accent honed from her upbringing in New Zealand, Australia and England. “But I took to it, and next thing I know I’m running up and down the halls pretending to be John Cena or Jeff Hardy or something. I was on my trampoline with a pillow trying to wrestle it – my own little ideas. Ever since then, I’ve never fallen out of love with it. I’ve had my hard days where I’ve wanted to give up and that would be it. But I fell in love with it. I still have those hearty feelings towards it.”

Some of Storm’s greatest success has come in Japan, where she is the world champion of the highly regarded Stardom promotion.