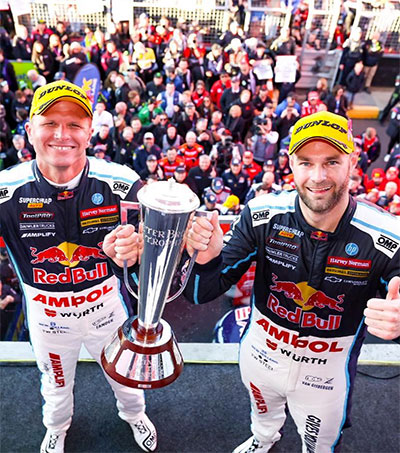 Aucklander Shane van Gisbergen, 33, (pictured right) now has more Supercars wins in one season than anybody else, after he and Australian Garth Tander, 45, surged to their second Bathurst 1000 title in three years after dominating a chaotic race at Mount Panorama, in early October, Caden Helmers reports for The Age.

It was a fitting farewell for the Holden Commodore, Triple Eight’s Red Bull Ampol racing duo sending the lion badge out on top in its last roar around the mountain in what was one of the all-time great finishes, Helmers writes.

Van Gisbergen held off a late challenge from Walkinshaw Andretti United’s Chaz Mostert, the gap on each lap barely changing by a tenth of a second through every sector during an extraordinary stint.

“I can’t really believe it. Shane at the end of the race, how he can do that, his focus and his ability to punch out laps like that is seriously impressive to watch,” Tander said.