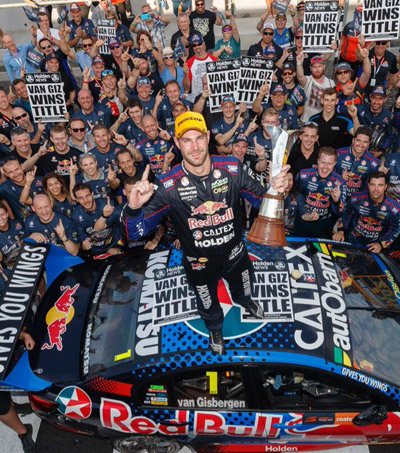 “As he became the first Kiwi champion since Jim Richards, Van Gisbergen rubber-stamped the final Sydney Olympic Park race with a race and title-winning burnout,” writes James Phelps for The Daily Telegraph.

“It is pretty cool to be the champion. It was a great race with Garth and I am just so stoked to win the race and also to be lucky enough to win the championship,’’ said Van Gisbergen.

“It has been a fantastic year. Not just for me but for the team. It was a shame Craig couldn’t quite get there but a one-two is pretty awesome.”

“It is a lifetime goal and to finally get here is quite special. I want to thank everyone again and hopefully I can come back and do it all again next year,’ said Van Gisbergen.