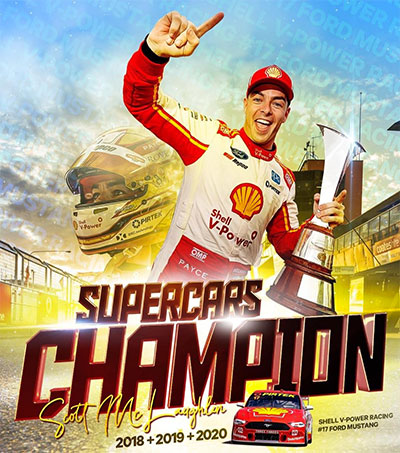 Christchurch-born Scott McLaughlin, 27, from the Shell V-Power Racing Team has put himself in rare company in the pantheon of Australian touring car racing by taking out the Supercar drivers championship for the third year in a row, Michael Lynch reports for The Sydney Morning Herald.

Many of the greats – Bob Jane, Allan Moffat, Dick Johnson, Auckland-born Jim Richards, Craig Lowndes and Marcos Ambrose – won two titles in a row but could never quite manage to make it triple titles in successive years. The great Peter Brock won three, but there were intervals between them (1974, ‘78 and ‘80).

Asked whether this championship meant more than his previous two, McLaughlin said: “We didn’t know where we were going and it’s been a whole lot of adversity. For us to win the championship with a round to go is true testimony to the team.’”