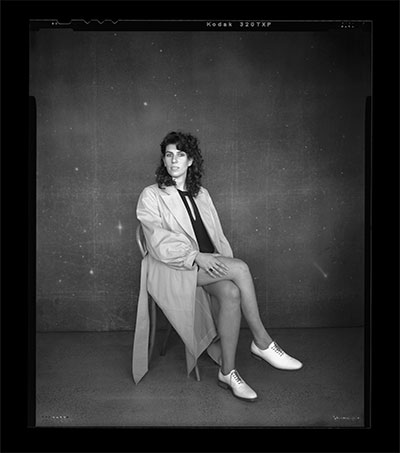 New Zealander Karen Walker’s latest campaign celebrates the art of film photography and women of all ages, with the designer and her 8-year-old daughter Valentina in front of the camera for the SS16/17’s Magnetic collection. Pictured here, florist Sophie Wolanski poses.

Walker images stick in your mind, Emma Do writes for the Australian online magazine, Broadsheet. In the past, Do says, mops have replaced models in the brand’s eyewear campaigns. A couple of seasons ago, it was a famous dog called Toast. Tongue has often been placed firmly in cheek.

The campaign was shot entirely on large format, black and white film, in homage to the season’s muse: American photographer Berenice Abbott. Abbott studied under Man Ray and later became known for her photos of New York City’s architecture in the ‘30s.

“This is the first time we’ve shot on film since digital happened and the first time we’ve ever worked in this large format of film,” Walker says. “It just fitted so well with the inspiration for the range and it was wonderful to slow everything down and be very considered with every frame.”