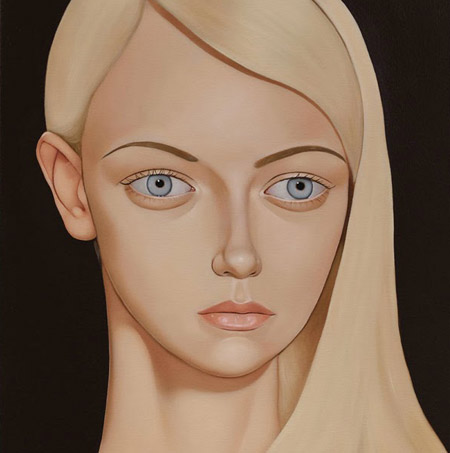 “Anatomy of a Phenomenon,” a one-of-a-kind exhibition from Auckland-born artist Peter Stichbury—2008 winner of New Zealand’s prestigious Wallace Art Award—recently enjoyed a successful month-long run (October 16-November 15, 2014) at the Tracy Williams gallery in New York (521 West 23rd Street). As described in the gallery’s press release, Peter Stichbury’s third exhibition with the gallery takes its name from computer scientist and astronomer Jacques Vallée’s 1965 investigative book about reports of unidentified flying objects (UFOs) that occurred from 1947 through 1964. In this series of oil on linen paintings, Stichbury examines the data and culture associated with this worldwide phenomenon.

The world’s leading contemporary art review ArtForum describes the unique layout of the exhibition (all works from 2014), with black-and-white painting based on published photographs of unidentified flying objects (UFOs) facing off against portraits of “experiencers”—individuals who have supposedly had a close encounter with aliens or their crafts. One portrait subject, Westall, Australia chemistry teacher Barbara Robbins, who was forced to hand over her camera to authorities following a notorious 1966 sighting, is depicted in Stichbury’s work as “an oval-faced blonde with haunted, wide-set eyes that suggest the persistence of a traumatic memory—and give her something of an otherworldly appearance.”

Noting that “this particular look is a longtime signature of the artist’s,” ArtForum critic Michael Wilson adds, “although [Stichbury’s] style remains consistent from project to project, this continual thematic reinvention has allowed the artist’s oeuvre to gradually accumulate an absorbing breadth and complexity. . . Just as the UFO phenomenon is shrouded in layers of disinformation, conspiracy theory, and myth that no amount of investigative reporting or academic debunking seems able to conclusively penetrate, so too do Stichbury’s portraits depict the citizens of an alternate reality that hovers just out of reach, visible but partially suppressed.”

Delving into this strange and fascinating subculture, the artist expertly employs the tension between the eccentric world of ufology and serious academic inquiry to probe more universal human questions: the wish for people to understand their place in the universe, longing for connection versus isolation, and the demystification and quantification of the unknown. Unnerving, otherworldly, and conceptually brilliant, “Anatomy of a Phenomenon” was an exhibition unlike any other.