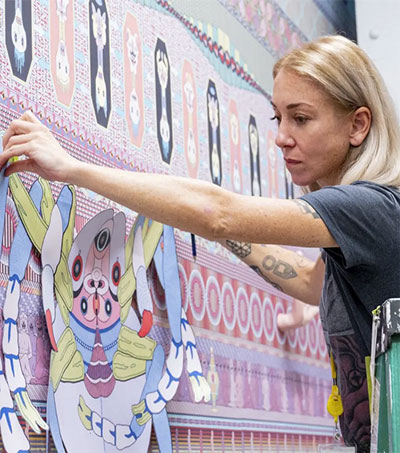 Some artists embrace chance and whimsy, but New Zealander Jess Johnson’s painstaking focus puts her into a space entirely under her command, John Bailey writes for WA Today. Right now, the contrast to the disorder and disruption outside her New York apartment couldn’t be more stark.

“It’s a world that I control completely,” she says. “I’ve always used it as a respite in that way… It’s a counterpoint to feeling that you have no control over other areas of your life. These events that I have no control over outside, I’m used to using my artwork to tune that stuff out.”

‘That stuff’, of course, is COVID-19. Like most artists, Johnson’s once-packed 2020 calendar has been wiped clean. Johnson is holed up in New York city, one of the epicentres of infection.

When the reality of the pandemic hit Johnson, her homeland suddenly felt very far away. “A friend and I were thinking of all of these contingency plans for possible post-apocalyptic scenarios that might happen in the United States.

“When thousands of people in New York won’t be able to pay rent or buy food, and the services stop working and the trash is piling up and the food distribution supply chain isn’t working anymore and the electricity turns off, how the f— do I get back to New Zealand?”

She found solace in her art. “I can only control my small world around me, and can’t drive myself crazy with speculative scenarios. I’ve levelled out into drawing, walking, hanging out with my cats, cooking.”

Johnson spent 12 years in Melbourne before moving to New York four years ago. She’s developed a highly successful and sought-after practice, but knows the art world at large will be transformed by the pandemic.

“Ways that I had been making an income as an artist might no longer be viable, in terms of whether my commercial galleries will survive this. In a recession one of the first things people stop buying is luxury consumer products, which art can be thought of.”

“There are good things coming out of it. It’s really nice to be able to go back to making art without some kind of outcome for it. You can connect with a lot of different things instead of being on the hamster treadmill making work for an exhibition, or all of the constant emailing and logistics and admin, which I’ve always resented horribly as an artist.”