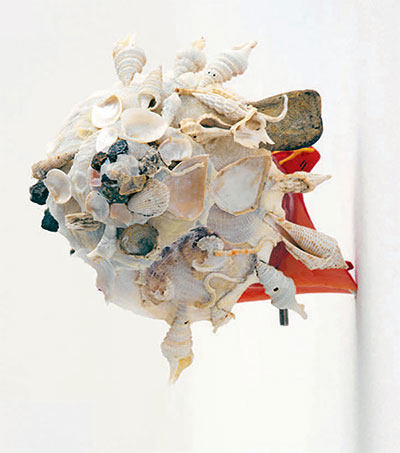 In 2018, Berlin-based New Zealander Zac Langdon-Pole, 32, won the BMW Art Journey prize at Art Basel Hong Kong, an award he used to fund a trip from Europe to his homeland, via several stops in the Pacific, including Hawaii, the Marshall Islands, and Samoa, Anthony Byrt reports for the US publication, Artforum. Langdon-Pole’s recent exhibition “Interbeing”, which showed at Auckland’s Michael Lett gallery, was (along with a new book about his practice) a culmination of his journey across the world.

“The trip’s course was determined by two overarching navigational frameworks: first, the history of celestial navigation by Pacific peoples and later colonisers; and second, the migratory patterns of two birds, the white stork and the Arctic tern, that travel extraordinary distances every year,” Byrt writes for the magazine.

“The latter species travels from the Arctic Circle all the way to Antarctica. Langdon-Pole’s interest in these specific birds, he explained in the new book, was ‘not only because of their analogical potential in understanding migration on a ‘global north to south’ axis, but also as a way of de-centring human perspective and opening it up to the flows and interdependencies of the natural world, of which we are an inextricable part’.

“Colonialism was, in the Pacific, a technological big bang, the first step in a migratory-scientific-extractive project that not only has recently caused rising sea levels and uncontrollable wildfires, but also found deadly expressions in the use of atomic bombs in Japan and in the radioactive devastation of ‘unpopulated’ atolls. In a series of photograms, Langdon-Pole explored this imperialist arc, using sand from evocative sites to create images that resemble night skies pocked with stars. These locales include Cooks Beach on New Zealand’s Coromandel Peninsula, near where James Cook and his men observed the transit of Mercury; Majuro, capital of the US-controlled Marshall Islands, a group of atolls where the superpower tested nuclear weapons, notably at Bikini and Rongelap; and Kealakekua Bay in Hawaii, where Cook’s decade-long Pacific adventures were brought to a bloody end. Connecting the sites and providing the impetus for Langdon-Pole’s decision to turn their granular realities into astronomical metaphors was the idea of ‘foreign’ or ‘alien’ invasions: that the material world we occupy and exploit is made from collisions between the meteoric – the compressed celestial matter that we’ve transformed into mineral commodities – and the modern, in the form of European Pacific exploration.

“Langdon-Pole’s strategy of combining materials to traverse vast distances of time and space had, at its heart, a deep ethical drive: an attempt to map the consequences of two centuries of Pacific exploitation. But the plan also pointed to the show’s central ambivalence: whether the artist’s own Xenophora-like journey of collection, imaging, and adornment really was pointing the way to a decolonised future, or whether it was still rooted in the art world’s touristic, extractive past.”