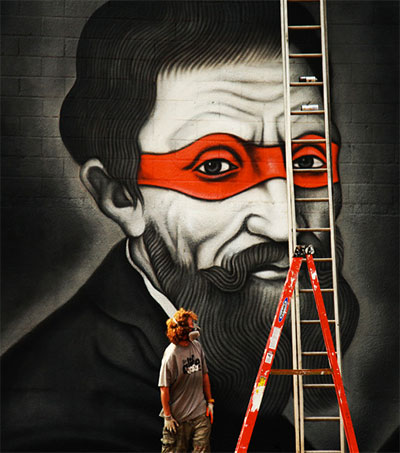 New Zealand street artist Owen Dippie is making a name for himself in Brooklyn, New York with “show-stopping” murals.

It takes a true intuitive sense and careful execution to produce a mashup or remix, and rarely does an artist create a classic in the process. But Dippie may have done it twice this month, the co-founders of BrooklynStreetArt.com write for the Huffington Post.

A child of the 1980s, Dippie grew up idolising artists like Biggie Smalls, Tupac Shakur, Michael Jackson, Andy Warhol, Basquiat and Keith Haring. As he became a teenage painter himself Dippie also discovered the painters of the High Renaissance of the 15th and 16th century and pushed himself to emulate with aerosol cans the brush technique and style of those Italian masters.

You could say Dippie is a Renaissance man in his own way of valuing the humanist, the religious, the classical and the modern. But then there are the Ninja Turtle masks colourfully wrapped around the heads of these familiar faces along a railroad track.

“I am a child of popular culture and am inspired by my heroes,” Dippie says. “By involving them in my art I pay my utmost respect to them in the best way I know how.”