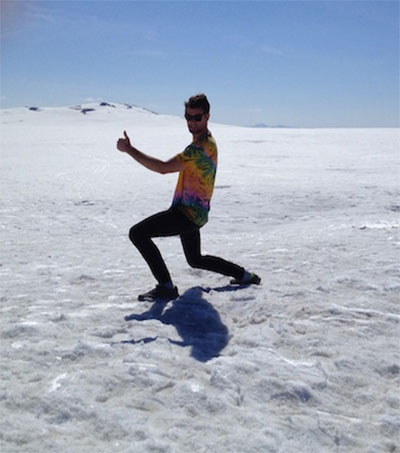 Ryan McPhun on His Good Band the Ruby Suns

Always trust a man in a jumpsuit, writes Sarah Illingworth for The Huffington Post. Ryan McPhun knows how to wear one well she says, and whilst performing musical acrobatics as a one-man act no less. In his band the Ruby Suns’ natural state he’s accompanied by two New Zealand padres, however since relocating to Oslo in pursuit of parenthood the Californian New Zealander has needed to think laterally.

And employ all his limbs, to pull off the live version of his multi-layered productions in a solo capacity. Illingworth talked to McPhun about his latest album Sprite Fountain, impolite pram gangs, and the unsettling contradiction between Norway’s centre-far right politics and its ‘egalitarian’ social policy.

“My father and his family are from NZ – née Scotland – and sometime preceding George HW Bush’s Gulf War in 1990, when there was a debate around bringing the draft back, my dad hooked up his twin Californian kiddos with New Zealand passports. When I realised uni in LA wasn’t for me I decided to head to Auckland, where I was initially enrolled in a music production diploma at SAE. I un-enrolled before the course started unfortunately,” McPhun says.

“There are plenty of great things about being here [in Norway] if you got the dosh,” he says. “There’s an indoor skatepark whose architecture makes it look like a fancy contemporary art museum from the outside. The inside has some cool architectural stuff too. I think they spent more time worrying about the architecture than the ramps to be honest. There’re some hills to go snowboarding and skiing down just a tram ride away from downtown.

“There are heaps of things I miss about New Zealand. It’s easy to take for granted the importance of being part of a community until you’re removed from it. That and food. FOOD. Everything takes a lot longer to get up here and there’s very little variety.

“Fatherhood [has] seeped into the subject matter of a few songs on Sprite Fountain, namely Pram Gang. It was initially inspired by walking around my neighbourhood in Oslo – teeming with young parents – feeling anxious about my own impending pram acquisition and its inhabitant. I was jogging a lot in those days in a futile attempt to quell the anxiety.

“This record sounds nothing like the last – but that’s almost more on brand for me than if I’d adhered to previous production styles. It’s a continuum of sorts.”

The Ruby Suns formed in 2004. Sprite Fountain is the band’s fifth album.