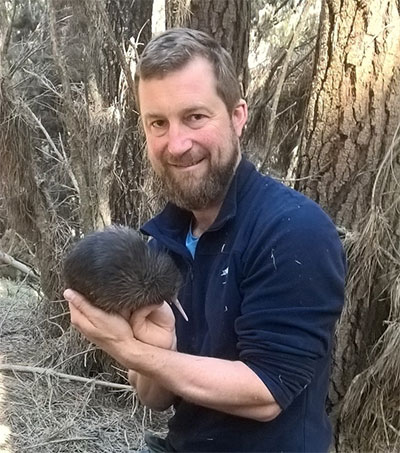 Struggling Kiwis Get A Little Help From Friends

“The Farm Cape Kidnappers, a luxury resort in the North Island, sits inside one of the largest wildlife sanctuaries in the country, the privately-owned Cape Sanctuary. There, efforts are underway to save the native brown kiwi. Visitors to the resort can take a walk into the Cape Sanctuary with a guide and hold one of the young birds during a routine checkup. I recently went looking for one of them, named ‘Mr Pitt’ with sanctuary manager Beau Fahnle,” Huffington Post contributor Jim Calio writes.

Calio interviews Fahnle about the work he does at the sanctuary.

“We generally go out every day and try to ‘beep’ each kiwi chick since they do move around to a new location every night. This may be a matter of feet or even miles; it’s like an ongoing game of hide-and-seek,” Fahnle explains.

“The radio receiver we used to find Mr Pitt is the only way we can locate him on his individual frequency, which comes from the tiny radio transmitter on his leg.”

“How did Mr Pitt end up in that particular nest, in this case under a bunch of pine needles? How small is the radio transmitter on his leg?” Calio asks Fahnle.

“Mr Pitt ended up there in his roost all by himself. We have to go out and find him when he is due for his health check,” Fahnle says. “The radio transmitter is quite small, less than an ounce. It is battery operated and it lasts for nine months; it needs reattachment regularly since we put them on so if the transmitter fails and we can’t find the bird the attachment band will break off and free the bird.”