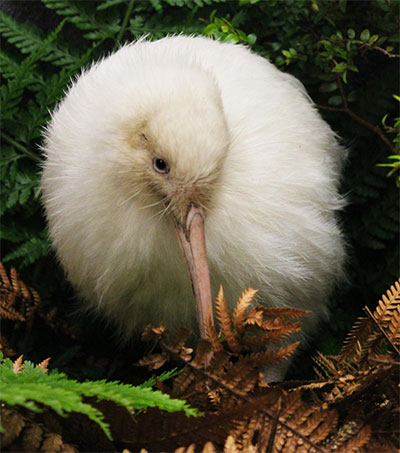 Manukura, a rare, snow-white kiwi that inspired a children’s book and was the first of its kind ever hatched in captivity has died at the Pūkaha National Wildlife Centre after multiple surgeries to remove an unfertilised egg, Rhea Mogul reports for CNN.

The North Island brown kiwi was hatched at Pūkaha in May 2011, with a rare genetic trait resulting in white feathers instead of the standard brown.

Manukura, which means of “of chiefly status”, was seen as a “huge blessing” by the local Rangitāne o Wairarapa tribe, who saw her as a unifying symbol, according to the wildlife centre.

“Over the past 10 years she delighted multitudes of people and in her own quiet way shone a spotlight on the precarious plight of kiwi in the wild,” said Department of Conservation Wairarapa operations manager Kathy Houkamau, who was the centre manager at Pūkaha when Manukura hatched. “She will be sorely missed.”