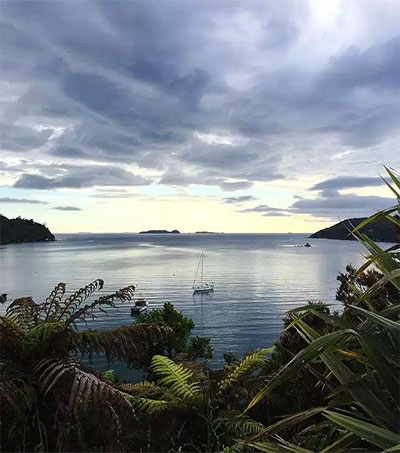 Stewart Island and the Elusive Kiwi

“Tell a New Zealander that you’ve been to Rakiura/Stewart Island and chances are they’ll be envious, telling you they can’t wait to visit their wee third-largest island. After intros – kia ora, how ya doing – they’ll say, ‘I heard it’s brilliant and did you see a kiwi?’” Jane Mundy reports for Canada’s The Province.

“I’ve been told that Stewart Island is like Vancouver Island – only fifty years ago,” Mundy writes. “Our guide Kylie pointed out the telephone tree by the side of the road. ‘In 1903 we got the first phone – a party line that harkens back to that phrase, “No secrets,”’ Kylie said.

“Here’s the fire station, should you need them, and ‘here is the police station, say g’day and introduce yourself when you’re in the village – we need to keep him busy,’ she said, laughing, ‘and do pop into the wee gift shop, all Kiwi made.’

“We passed the wee gas pump, the little shack for foot massage (the island is hiker haven) and next door, 60 people work at the Department of Conservation (DOC). The island’s population is less than 400 and most live around the township of Oban. There’s no bank, just an ATM at the grocery store next to a bulletin board with a wealth of information. ‘If someone gets ahold of yer birthday you’ve ‘ad it,’ said a passerby. Again, no secrets. The entire population’s social life and every celebration is posted here. And the grocery store has stiff competition: most everyone barters, such as fish for tomatoes, crayfish for potatoes.

“I took a quick water taxi ride to Ulva Island. Predator-free since 1997, a wide range of rare plants and native birds flourish (rats are a problem on Stewart island and may explain the 60 DOC staff). There were so many calls from tui, bellbirds, kaka and kakariki and I even spied some with my binoculars. Our guide conducts half and full-day tours of the island, vocalising with the birds and distinguishing between every caw, chirp, click or creak emanating from above. It was like an avian symphony – or cacophony, depending upon your love of birds.

“Ulva Island truly is an unparalleled sanctuary for birds, trees and plants that otherwise might be extinct. The prehistoric hardwood podocarp forest is also home to species of plants – many ferns – 350 million years old. Returning to the dock a curious weka – a large, brown flightless bird similar to a kiwi – followed me to the boat, no doubt looking for handouts.

“And I never did see a kiwi. That’s just one reason to return.”