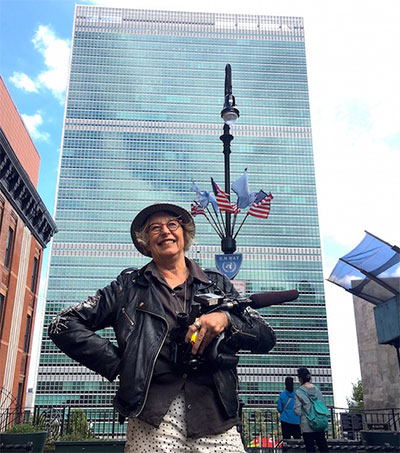 When Helen Clark ran for the post of UN Secretary-General in 2016, Gaylene Preston was by her side. The New Zealand filmmaker, who initially contacted Clark about documenting her life as the then-head of the UNDP, proved to have picked the perfect moment.

New Zealand’s first elected woman Prime Minister was soon to announce her bid for the top role. My Year with Helen became an intriguing record of Clark’s campaign, executed while she continued to fulfil her UNDP duties. Sarah Illingworth from Impolitikal catches up with Preston, ahead of the film’s London screening on 28 November.

“I can’t remember when I first met Helen,” Preston explains. “She says everyone in New Zealand knows her, and knows me, so we thought we knew one another. That’s about right. I think I went to a meeting with her over film funding when she was first in Parliament, but the point is, once you have met Helen, she is unlikely to forget you or your name.

“[I was motivated to make the film because] I was wondering why, in a world that seemed to be getting more and more hopeless, Helen had renewed her contract at the UN – a much maligned organisation. She is not one for just smiling and waving, and I wanted to know what was fuelling her optimism.

“I joined her for a film shoot on a UNDP country visit to Botswana, and it was while I was there I realised she was probably going to be throwing her hat in the ring to be considered for the top job. That was the hook I needed to base a feature length film around.”