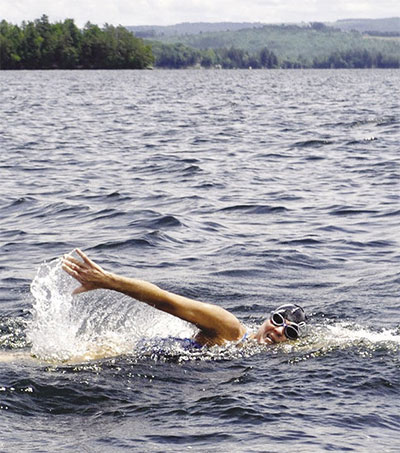 Charlotte Brynn, a New Zealander who lives in Stowe, Vermont, is one of the world’s 50 most adventurous female open-water swimmers, according to a recently released list from the World Open Water Swimming Association.

Brynn grew up in the water, often running the mile to the beach to swim before school. Among countless open water swimming accomplishments, she’s attempted to swim the English Channel three times, swam around Manhattan, and completed several double-crossings of Lake Champlain, a 40km swim in Lake Memphremagog, and the Catalina Channel swim. She is also a two-time US Masters Swimming Long Distance All-American.

“I thrive on focus and a goal. It’s about committing to being positive. I love putting myself out there, being uncomfortable, and stretching my limits. And I just love a bit of adventure, going to new environs and meeting the unexpected,” Brynn said.

The World Open Water Swimming Association’s list features women from 16 countries, including “contemporary aquatic adventurers who have done unprecedented swims of note or a significant number of risk-inherent channel, lake or marathon swims, women who have proven themselves in ice swimming competitions and solo extreme swims, and women who have safely escorted or coached many swimmers of various abilities in rough waters.”