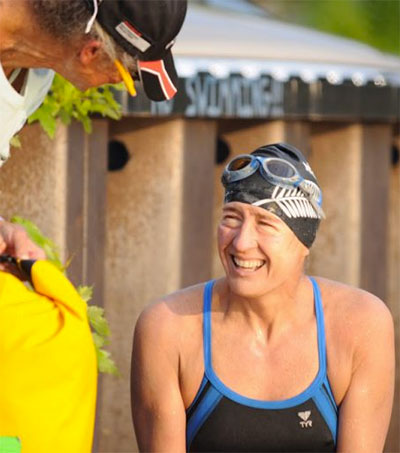 New Zealander Charlotte Brynn recently swam the 40.2km distance between Lake Memphremagog Magog, Quebec and Newport, Vermont in 13 hours and 28 minutes, the second time she has completed the swim.

Brynn lives in Stowe, Vermont where she works as director of nonprofit community swimming pool and fitness centre, The Swimming Hole.

“Brynn chose to swim north to south, in the face of a slight current against her and head winds that rose to 16 to 19kph on occasion. The winds were calm during the start and calmed again during the last few hours of her swim,” Swimming World Magazine reported.

Brynn is a well known and accomplished ultra-marathon swimmer, having swum the 45km around Manhattan, crossed the Catalina Channel in California, and Lake Champlain on the border of Canada and the United States, twice. Last year she swam from Newport to Skinner Island and back (28km) and from Newport around Ile Ronde and back (25km).

In 2016 she was inducted into the Vermont Open Water Swimming Hall of Fame.