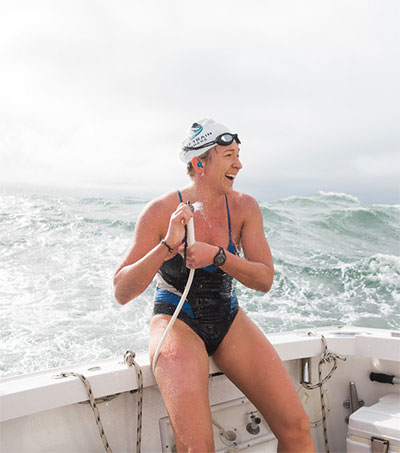 Kim Chambers, a former ballerina who grew up on a sheep farm in the King Country has done what no other woman has yet achieved: swum the world’s most difficult ocean swim, from the shark-ridden Farallon​ Islands 48km off the coast of San Francisco to the Golden Gate Bridge. That 2015 swim is documented in a film, Kim Swims, which is screening in Wellington and Auckland as part of the Doc Edge Festival.

“If you think you can’t do something and you’re scared of it, that’s when you should do it,” Chambers says.

Speaking by video from her apartment high on San Francisco’s hills, it’s now more than two years since Chambers swam for 17 hours through 17 degree water wearing nothing but a black swimsuit emblazoned with the silver fern. She’s excited the film is coming home.

“Being a Kiwi has made me strong and resilient. It’s really special to unofficially represent my country doing this,” she says.

In the world of extreme marathon swimming, the 30 miles of shark-infested waters between the Farallon Islands and San Francisco is the most difficult stretch to cross. While the English Channel gets all the attention, more than 3000 swimmers have crossed its bitterly cold waters.

Until August 2015, only four people, all men, had finished the Farallon Islands swim.

Independent filmmaker, Kate Webber, who made Kim Swims, set out to tell Chambers’ inspiring story. The film tagline says this: “Nothing is impossible if you’re brave enough to say yes.”

Webber, a photographer and ocean swimmer, says: “This is a film about the incredible resilience and triumph of the human spirit. You do not need to like swimming or even be a swimmer to relate to this story. And while it is about a woman athlete, made by a female filmmaker, my hope is that everyone can relate to the story, regardless of gender.”

Chambers tells her story too, at Ted X in Catalina, and at speaking events, while she is also writing a book about her Farallon Islands swim.

What’s next, when she has conquered the toughest goal in ocean swimming?

“I’m working on another athletic endeavour that no-one has done before.” It doesn’t involve a swimsuit. If she achieves it, she will be the first New Zealander and the first woman to nail it.