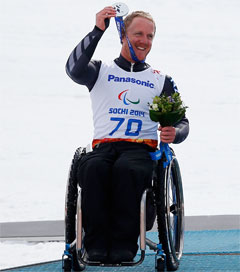 New Plymouth skier Corey Peters, 30, has won silver in the giant slalom at the Sochi Paralympics.

A former Taranaki age group rugby representative, Peters was paralysed at a motocross event in 2009.

He says all the hours of training he had since poured into skiing in Wanaka and Colorado since taking it up in 2011 had paid off in a way that surpassed his expectations.

“It makes it even more special coming away with a medal. Even if I didn’t have a medal I’d still be stoked but this is just the icing on the cake.”

The last New Zealander to compete at Sochi, sitting class athlete Peters shone in his favoured event, the giant slalom, to reward a consistent week in which he placed fourth in the Super-Combined discipline and sixth in Super-G.