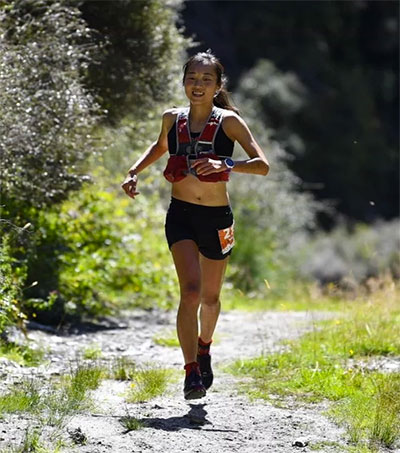 Chinese-born New Zealander Nancy Jiang’s determination to succeed in trail running is shaped by her upbringing, when her parents pushed for academics over sport, according to Mark Agnew who interviewed Jiang on the South China Morning Post’s podcast, Adventure Trail.

The New Zealand Trail World Championships runner has come a long way in the sport considering her parents told her “Chinese people don’t run” when she was a child.

Jiang emigrated to New Zealand aged five and has led an active life since, but it was not until she visited Tignes in the French Alps four years ago that she turned to mountain running. Quickly falling in love with the sport, she signed up for the 56km OCC at the Ultra Trail du Mont Blanc (UTMB).

“I’d heard about it. But I definitely didn’t realise how big it was,” she said of the festival atmosphere during the UTMB week.

Jiang, 27, put her all into training and came fifth. She said she wanted to make sure she “did a good job”.

“For a race like the OCC, you don’t just show up and run it,” she said on the Adventure Trail podcast. “How I overcome all the low points in the race, and how hard I push myself, the main thing is also enjoyment.”

Her talent did not go unnoticed, and this year she joined the New Zealand team at the Trail World Championships in Portugal. She finished 48th, despite starting the race with the flu.

Her passion for running might not have grown so strong, given her parents’ attitude to running when she was growing up.

“When I was younger it frustrated me a bit that they weren’t supportive of my desire to pursue running. They were much more focused on my academic achievements, which I guess is typical of the Chinese culture,” said Jiang.

“But now I am older, and somewhat wiser, I realised it is because they cared. It was out of love.”

Ultimately and ironically, the tough love has set Jiang up for a success in ultra running: “I’m a lot more resilient. Just because something is hard and there are obstacles and challenges it doesn’t mean you quit.”

Jiang spends half her year in France working remotely for a New Zealand-based company as a structural engineer, and half the year at home.