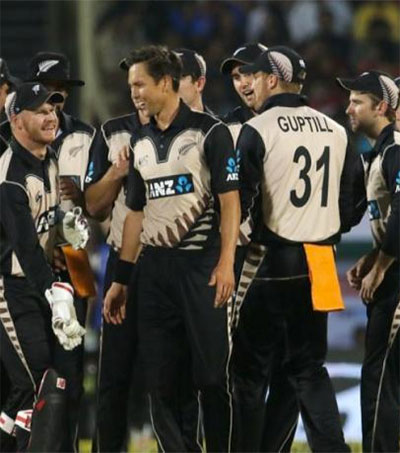 Chasing 197-run target, India were restricted to 156/7 in 20 overs. Boult led the attack with excellent figures of 4-34, with Mitchell Santner, Adam Milne and Ish Sodhi taking a wicket each, the Times of India reports.

Martin Guptill later danced down the track to smack Yuzvendra Chahal over mid-wicket and Colin Munro was almost caught on the boundary line by Bhuvneshwar Kumar in the same over at the end of which the visitors were 83 without loss.

Munro struck Axar Patel for two sixes in successive balls to reach his 50 in 26 balls, besides raising the 100 of the innings in the 11th over before Chahal broke the first wicket stand by having Guptill caught at long off.

Siraj then got his first wicket in international cricket, the prized one of rival skipper Kane Williamson for 12, when the batsman flicked straight to Rohit Sharma at deep mid-wicket to leave the Black Caps at 140 for two in the 15th over.

Munro was also let off on 79 by Chahal off Kumar to remain unconquered.

Aucklander Munro, who was named Man of the Match, told Stuff he found the most success when he watched the ball, rather than premeditating his shots.

“I think the way I bat, it’s the same every time, whether I’m chasing or setting. It’s about watching the ball, stay still and try and hit every ball for four or six,” Munro said.

“If it’s not there, then try and get off strike.”

Original article by The Times of India, November 4, 2017.