NZEDGE  >  News  >  Innovation  >  Measure Your World with a Smartphone Laser 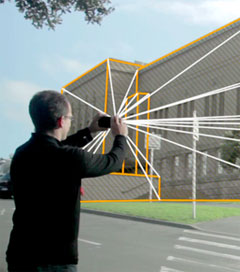 Measure Your World with a Smartphone Laser

New Zealand-developed Spike, created by ikeGPS, “the world’s first laser accurate smartphone accessory,” is crowd-funding on Kickstarter and offering those who pledge more than $10,000 a trip to New Zealand to visit the development team and some of the crew behind the Lord of the Rings and Hobbit films.

Winner of the Innovative Hi-Tech Hardware Product 2013 at this year’s New Zealand Hi-Tech Awards, Spike “can snap, measure, map, 3D model (and share) any object up to 200 yards away,” according to project information on Kickstarter, “Just by taking a snapshot of it on your smartphone.”

“Spike’s laser accurate measurement capability will revolutionize remote measurement and make your Augmented Reality experiences real. Not just by making them more accurate, but by empowering you to develop and experience them right there on your smartphone.

“Spike has both professional and recreational applications. It’s designed for anyone who needs to measure, map or model their outside world.

“You could be an architect, engineer, interior designer, or film set locator. An insurance appraiser, underwriter/valuer, commercial painter or arborist.”

Ike technology has been used by the UN & US Army Corps of Engineers for disaster recovery in Haiti, in the aftermath of Cyclone Katrina and for de-mining.