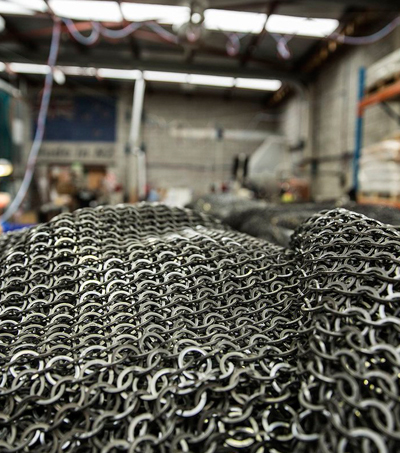 Having your name “bestowed upon you by award-winning actor Viggo Mortensen – or if we’re giving him his full title, Aragorn, son of Arathorn – is the coolest origin story I’ve ever heard,” writes Laurie Winkless in an article for Forbes. She is referring to New Zealand-based materials company, Kaynemaile.

When working as artistic director for the Lord of the Rings (LOTR) movie trilogy, Kaynemaile founder Kayne Horsham had to source chainmail, which is worn by almost every character in the movie franchise.  While chainmail has been around since the 5th century, the chainmail sourced initially was incredibly heavy, which made it hard for the actors and stuntpeople to perform in it. That was the reason why Kayne and his team started experimenting with other materials and “eventually coming up with a metal-coated plastic mail that weighed considerably less than traditional mail.”

“We started with lengths of polypropylene plumbing tube and cut it into rings on this little machine, before hand-assembling it into an interconnected mesh. Then we electroplated pure silver onto the rings, followed by copper via electroforming,” explained Horsham, who admits it wasn’t the most efficient process. “All of the assembly was done by hand… The guilt of seeing my colleagues with sore fingers made me determined to find a better, safer, and quicker way of doing it.”

Several years later he found an engineering company who were up for the challenge of working with him to reinvent chainmail.

“I kept coming back to the idea of making rings without any joins. The circle is an inherently strong engineering shape, but the join in chain links was the point of failure,” he said.

“The product now known as Kaynemaile was actually produced using a fairly standard industrial process – injection molding.” “We can produce huge quantities of this stuff – as long as material’s being fed in, there’s no length limit, and by stitching it together, we make sections wide enough to wrap around entire buildings,” said Kayne.

Their current project – “a façade for an Adelaide car park building is made up of around 7.3 million rings” and the “grey mesh screen is large enough to clad the nine-story structure. And, remarkably, it will go up as a single piece, weighing less than 4 tons,” writes Winkless.

This is why architects and engineers are so excited – “this ultra-lightweight material can be used in the place of thin sheets of steel – as balustrades for staircases, partitions within buildings, or for non-load-bearing external structures.”

Even though “the mesh seems to be more air than solid, it is extremely effective at keeping sunlight out” and its cross-sectional density can be increased so “much that it keeps out 95% of wind and rain.” The fact that the mesh can flex, twist and move in all directions, makes it perfect for buildings in cities with high seismic activity.”

Horsham said that he wasn’t sure about working with plastic at first seeing how much damage it’s doing to the environment, which is why he made the commitment to take responsibility for the plastic at all stages of its development, use and disposal, as reported in the article.

“We’ve fully adopted a cradle-to-cradle ethos, which means that we can infinitely recycle our materials in-house. We make mesh to order and store any offcuts until we have enough to reprocess them,” he said.  “I truly believe that it’s only through science and technology that we can find answers to resolve the problems of the past”.