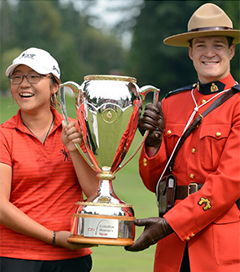 16-year-old Lydia Ko has made history at the CN Canadian Women’s Open, defending her Canadian Open title with a dominating win in Alberta and becoming the first amateur in history to win two LPGA events.

The Auckland teenager shot a final round six-under-64 to win by five strokes over Karine Icher at the Royal Mayfair Gold Club. However as an amateur player Ko cannot accept the US$300,000 prize money, so it will be awarded to Icher as the ‘cash winner’ instead.

This is the fourth time Ko has taken out a professional tournament, having won last year’s Canadian Open as well as the 2012 NSW Open and the New Zealand Open in February.

However, the win has not changed her decision on when she will go professional.

“I’ve always said I’m thinking about it and that’s the same answer right here,” said Ko. “Nothing has changed within the last 72 hours. I’m happy at the moment and I think this win will make us think a little better of what is a good option right now.”