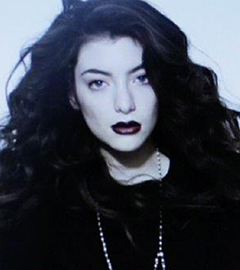 “The thrill that’ll getcha when you get your picture on the cover of the Rolling Stone,” sang Dr Hook in 1972, a blatant but ultimately successful act of musical sycophancy that earned the band the privilege that year. New Zealand pop sensation Lorde needs no such underhand tactics, earning herself a Rolling Stone cover on sheer talent and bravado alone.

In the new issue out today (Friday), Lorde features on the cover of the venerable rock magazine in a piece by contributing editor Rob Tannenbaum titled, How Lorde Broke All the Rules. The article is accompanied by a series of haunting images of the artist by photographer Noah Berlow.

The coup is a startling achievement for the 17-year-old, who is billed as “the unlikeliest superstar in pop”.

In the magazine’s pre-release, Lorde is quoted on a wide and eclectic range of topics, including her reliance on bravado: “I get paralysingly nervous a lot of times, so I tried bravado. I think my whole career can be boiled down to the one word I always say in meetings – strength.”

Elsewhere, she is endearingly candid about her influences (“Grace Jones … These shoulders! These pants! Girls can wear pants and be awesome”) and the necessity of retaining a strong sense of personal identity on the world stage.

“You have to go into [the industry] with an idea of who you are and what you want to do, and you have to have an idea of the things that you won’t do,” she tells Tannenbaum.

Independent analysis is provided by Tavi Gevinson, editor of Rookie, described as the definitive website for self-aware teen girls, who says Lorde’s personae is nuanced: “She sings about partying, she curses like a sailor and her songs aren’t completely asexual. She reflects an intelligence in girls our age and normalises it.”

As for the impact of fame on New Zealand’s most famous self-aware teenager, Lorde says “it’s a really weird thing to write a song like Royals and then go through something like this, which changes your entire world and way of living and changes what you do every day… So it has been weird.”